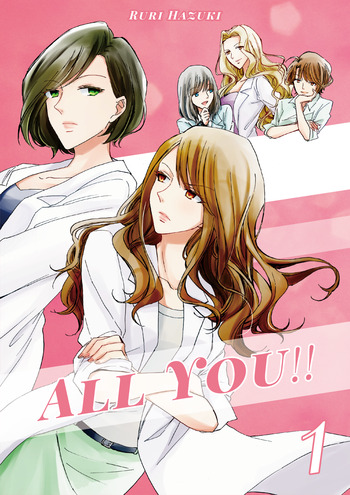 In an all-girl school, there's a student everybody calls "Touma-kun".

The Red Rook, The Blue Bishop, and The Colorful Pawn

When Misao lost her virginity at age 14, rumors spread like wildfire and next thing you know, her friends become her bullies and the entire school mocked her. At her junior high school, the rumors were bad but when she went to an all-girls high school, they only became worse. At this point, she was labeled as a delinquent amid many other labels but that did not stop Chiaki from helping her out in a time of need, nor did it stop her from becoming her friend. The gentle giant Chiaki was like a ray of sunshine for Misao. Could this be the start of something special or is Misao misinterpreting Chiaki’s cheerful attitude for love?

Under the rain, Fujiwara Kito fell in love at first sight. From this moment she pursues her senpai, Tachibana Arise, throughout their all-girls school.

Mikoshima Yuu is ecstatic to be entering into a all-girl world at St. Millefeuille Gakuen. Mariya is annoyed that she's been assigned to show the newbie around. But Nagi volunteers to escort her - in fact, she's positive frantic to do so, and immediately starts to court Yuu, who is thrown off her stride when she's so openly being pursued by a beautiful girl.

Natural airhead Chiho Sakuranaga entered an all girl's high school due to a misunderstanding. Before the entrance ceremony she ran into a puzzling, but beautiful boy like girl. Later the school president smiles at her and she can't stop the sudden pounding in her chest.

I Want You to Only Love My Body

Can I Really Buy You With Money?

Chizu continues to pay Nako through the "Rental Friends" service in order to see her. After realizing that they both attend the same school, Chizu gathers her courage to talk to Nako outside of their paid service time. Chizu wishes to be real friends with Nako, but that would be against the service agreement... On the other hand, Nako wants more than friendship from Chizu.