All Roses Have Thorns - Recommendations 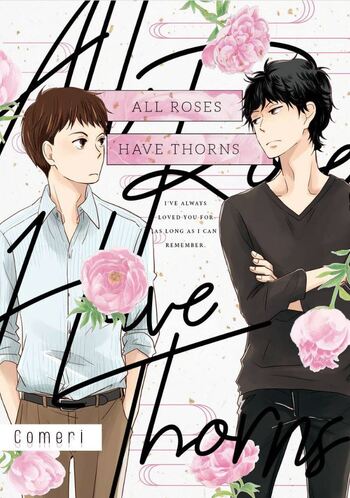 In this world, there are some people who you are not allowed to fall in love with—— Yuki lives together with his deceased older sister’s husband—Keiichirou. He fell in love at first sight, and continued to hold those feelings secretly since then. But that means nothing, for this love is not to be allowed. One night, Keiichirou hugged Yuki and said "Stay with me"! Since his sister’s death, the dangerous balance between them finally starts to crumble!?

Jun secretly loved Hayato since highschool. But Hayato already has someone by his side, his best friend. A few years past, Jun sees Hayato again in his job. He took him home after a drinking party. His dream turned to reality. Everything seems to go well until... Hayato tells Jun not to come over because a friend will stop by... without explaining much... Jun becomes nervous about the outcome of their relationship. Is Jun the real lover? Or is he a substitute for someone else?

Shigeta Maki is stuck with the hardest lesson of his life. Being so much in love and with the object of his affections, Professor Onodera, so far out of reach, he has no idea what to do. Lucky for him there's someone to show him the way: Yoshioka, sex expert and delinquent tenant of the apartment complex Maki lives in and helps run. Will love lessons help Maki snag his unrequited love? Or will he find a new goal to shoot for?

A Friendship Gone Too Far

"I never knew doing it with a guy could feel so good..." When two of his close friends come out as a couple, Yoshi starts wondering what it's like to make love to another guy. When he starts searching online for a partner to experiment with, his friend Kan gets worried, and offers himself up instead! Also included in this volume is "Be Mine," a mature romance about Ryu and Haru, the best friends of Yoshi and Kan.

Kanda Tokizou, 42 years old. He has an unrequited love for his best friend from high school, Shiba Ryuuji, for 25 years. He has always depended on Shiba, but there is no possibility of him telling his straight friend about his feelings. “To live my life with my best friend at my side isn’t so bad.” But now, at the age of 42, there is an unexpected chance. Could their relationship possibly change..?

"Until you find someone you like more than me, once a year, on your birthday, I will go on a date with you" are the words Hayate said to Takashi who confessed to him on the day of their high school graduation. It has been ten years since then, and Hayate has diligently followed through with his promise to Takashi, but instead of his feelings fading away - they've only increased. Thinking that he cannot continue with unrequited love toward his straight friend, Takashi lies to Hayate saying "I've found someone I love..."

One day, at the party Takayuki attends, he meets Takeuchi - his old classmate from high school 8 years ago. Takeuchi’s girlfriend in highschool was stolen by Takayuki. What will happen when the two meet? What will happen when one of them is drunk? Will Takayuki painful feelings of unrequited love come to an end or will there be a happy ending?

Lee Mo Yan, known as "Lee", an elite of the legal world who is approaching his forties, had worked hard to pave the way to get to where he was. However, all that he worked for vanished into thin air when a political scandal broke out involving a politician he backed and when his lover dumped him. Finding himself in a worrisome situation, Lee received an unexpected invitation from an upperclassman from his past.

Pei JiYu was about to die. However, those who previously detested him have a change in personality one after another. With one competitive and another sincere, they told him “Pei JiYu, I love you”. There are only a few who can have a life like Pei JiYu, with such twists and beyond expectations. Everyone loves Pei JiYu but it is a pity that he no longer loves anyone.

Sakai, a competent man, holds an unrequited love for Oikawa, a hopeless guy who works in the same office. When he's faced with Oikawa's smiling face, his body reacts and his pheromone level doubles! Towards Sakai who's overflowing with sexy atmosphere, Oikawa is ...!?