Alice in the Country of Hearts: White Rabbit and Some Afternoon Tea

Alt title: Heart no Kuni no Alice: Tokei Usagi to Gogo no Koucha wo 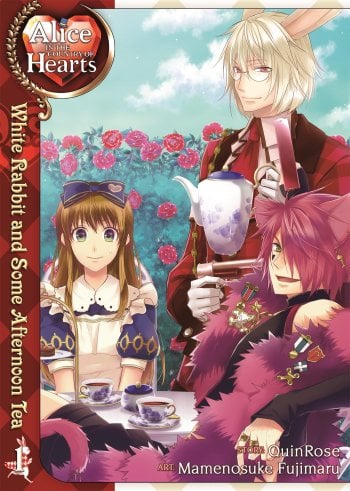 <<In short: it might be one of the best Heart/Clover/Joker no kuni no Alice mangas>>

Before starting though, for those who don't know, this is actually a spin-off manga from the original Heart no kuni no Alice, so I recommend you read that one before this manga to have more context and be able to fully understand this one. Actually, I do strongly recommend to read this after the first Alice manga! So...Off you go to read that one and then come back here! Ok? Good.

Now..I must be honest, when I started this manga, I was in only for the pretty art which Mamenosuke Fujimaru is known as when it comes to the Alice-series; I was never a very big fan of Peter, actually I used to dislike him only to later manage to accept his personality, but he was still low on my list of favorite characters...Well, this made me fully reconsider that.

" Tokei Usagi to Gogo no Koucha wo" is not just something that adds up on the story from the original manga and not just something that adds to Peter's character like the Clover no kuni no Alice Ace or Bloody Twins single volumes did, it basically retells it in a way that puts emphasis on Peter's point of view (without being repetitive) which is crucially important for Alice as a character; and what is more important, it isn't a sequel like the Cheshire cat to Waltz-Clover continuity, so while the same issues might be tackled at some points in that one, here they keep it in the Heart world, which avoids the difficult implications coming with the Clover world (if you're new and don't know what the Clover country is, you don't need to worry about it for now; worry about it AFTER this manga). Let's say that it manages to keep the reader on familiar grounds with a familiar base and in this case it was only a plus for the storytelling.

Heart no kuni no Alice always had several layers, psychological as well as literally layers of reality to take into consideration and while I thought that it was only completely obvious in the otome game the story is based off, it came out pretty well in just these 2 volumes as well, which is actually amazing because it offers the kind of deepness that I don't remember I felt in the original. It was able to convey both the need of escapism as well as the continous buzzing in one's head about not being able to forget reality forever in a roundabout way, at least as much as a romance story can afford to. Overall it is debatable if the story actually promotes escapism, but that's the question regarding the entirety of the - no kuni no Alice universe, yet this manga doesn't escape the chance to implant that doubt in the reader's hearts either, so ultimately, it does remain bittersweet no matter what Alice chooses to do and that's highly entertaining for me.

It was interesting how Fujimaru Mamenosuke tried to do a parallel between Peter and Boris and that really works considering their entirely different, almost opposite personalities. I have a real soft spot for Boris, but in this manga, while my love for him didn't diminish in the slightest, I did want to hit him for sometimes antagonizing Peter for at least three quarters of the manga. And I consider that a feat seeing how I'd usually ship Boris and Alice and nobody could ever poke the lovey-dovey bubble I set for them in my heart, yet Peter managed to do that.

About Peter and Alice, Alice reached the highest point of her character development through the end and mostly emphasized by Alice's true past; Peter on the other hand only showed slight changes, but it is in his character to be slow. Even Boris showed some development starting with his disinterest and ending in curiosity and ultimately acceptance.

It's really gorgeous. It's only a 9 for lacking in details, but it's still overall beautiful in its simplicity and I was never able to say anything against the panel disposition and the flow.

I really cannot express how both teary and satisfied I was at the end; it's really one of those mangas that I know for sure I'd go back and read to make myself feel better one day and it would have 100% chance of success.

I recommend it to all Heart no kuni no Alice fans, whether you do or don't like Peter. If you do like him, you'll just like him more. If you don't like him, it might make you reconsider and if not, it does have other reasons for enjoyment. Eitherway, it's not a waste of time to try it out ^^