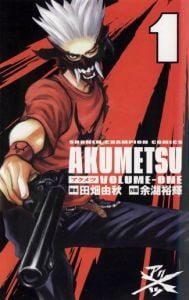 Nagasawa Shiina is just an average 3rd year high school student until her parents' company goes bankrupt. In order to pay the bills, she sells herself into prostitution. At her first job, a mysterious masked man crashes the party... and it's someone she knows. Akumetsu is the story of Shou, a vigilante that's out trying to straighten the corrupt Japanese Government through terrorism with his "One man, One kill" code of action.

Before starting this review, you should probably know 2 things: 1) Akumetsu gets compared to Death Note a lot. While this is somewhat correct, it's actually only on a superficial level. (Also, Akumetsu came first.) However, somehow I couldn't stop myself from comparing to two either (after allpointing out differences is comparing too). 2) This manga was published in a shounen magazine, but has lots of elements in it that make it quite close to a seinen. Well, that's it, so lets start with the question: what is Akumetsu actually about? The story takes place in a setting where Japan has huge debts (7 trillion). A high-schooler called Shou who puts on a mask to become the vigilante Akumetsu (which literally means something like "evil destruction" ) and decides to kill evil people. Because he kills people, the police wants to catch him, but because he has special powers that seems to be an impossible task. This premise will probably sound familiar for those who know Death Note, but that's also where the similarities end imo (well, it's not like the premise of killing evil is too original anyway). The biggest difference between Akumetsu and other vigilantes is that Akumetsu doesn't go after the "regular" evildoers or supervillains: Akumetsu goes after the corrupt public servants, in hopes of reforming Japan and creating a better country. He also has a very strange policy: "one man, one kill"; meaning every time he kills somebody, he dies too. Telling you how he still lives after that would kinda spoil it, so I'll leave that to your imagination until you decide to read it ;p Akumetsu does not screw around So much for the premise, but how is the overall scale? Well, it's pretty damn great. Once I started reading it I couldn't stop: it's a great mix of seriousness with sillyness, seinen and shounen elements. You feel like you're one of the people of Japan who are watching Akumetsu's exploits, and you constantly wonder: "what will that crazy guy think of next?" The moral issue of killing people who are "evil" is also adressed quite well imo. Or rather, Shou himself adresses it. He actually goes to TV stations to discuss his actions with reporters. Which makes for very interesting TV dialogues. Could killing evil make you a good guy? I have to admit that the story became a little too repetitive in the middle part, because it was too much of the "extremely evil guy - surprise - kill - die" formula there, but that's only for 1 or 2 of the 18 volumes. At times, it's also kind of hard to follow what exactly the people are talking about if you've got no idea how the Japanese political system works. On the other hand, the conclusion was very solid. Story: 8.5/10 (great premise, overall very good, solid conclusion, but loses points because of repetitiveness and because it's not always very open for Western readers) Moving on to the characters then, and I notice I'm drawing a bit of a blank here. What I mean with this is that, apart from Shou, there aren't many interesting, recurring characters. Let's have a look: - Shou, who is, as stated before, the main character. By far the most interesting character because of his goals, motives, weird actions and because he's all-around well-established. - Then there's a bunch of people that are killed, who are not always all that interesting. Explaining why a person is bad or not took sometimes a little too long, or too much exposition. And even then, if you don't understand Japanese politics it isn't always too clear who the hell they are supposed to be. - Some cops, who are a) really incompetent or b) sent off the case because the people above them are idiots. The latter are an interesting bunch, but there's not really one individual that sticks out. - The prime minister is probably one of the most notable side characters, because he isn't deemed evil right off the bat. He wanted to reform the country too, but couldn't because of corrupt politicians. Shou decides to give him a hand, and gives him a deadline too. The actions of the prime minister after this are interesting to see. - There's also a couple of Shou's friends and some other important characters that  I can't really adress here without spoiling it, but they also have varying degrees of interesting-ness. Characters: 7/10 (big cast but not many are recurring characters, with individuals varying between very interesting and completely uninteresting) The artwork is very good too, it's vivid and is nice to look at. Beware, however, that it's sometimes a bit... graphic (lots of blood etc) Art 9/10 Overall: 8.5/10  A great manga about a vigilante's struggles to reform the country "all by himself". Definitely deserves more attention, and thus vigorously recommended!  Note: If you want to give feedback about my review so my reviews can be better in the future, please do!

This series was better than average it would have be a better series if it was in more realistic scenerio where story is not that only japan is there but the whole world. Since akemetsu manga focus the points of political reforms in tax investment and morality of the politicians beaurcrate and the system, it seems author have done his homework but he forgot to think that japan is not the whole world but a part of it, akemetsu story line is good but it rather becomes cliched after somettime though artist introduce new ideas in scenerio of killing but in the end it is same( a corrupt politicians, akemetsu arrives, play pranks with him ,kill that bastard in an novel way and after that his heads goes boom, tada new arc), special part of this series was past arc in which we were told how akemetsu becomes akemetsu , mass politician execution ,yakuza part but arc which blows your mind is fake akumetsu arc which introdue akemetsu menifesto and his idea of what evil and not or wether he is a terrorist or not . Art is simple ,same with backrounds no new great heights is achieved with its quality or detaling but it was ok . As for characters points are deducted because of cliched politicians behaviour and showing them all as a scumbag down to the core which is not true completely, there was not a single positive points in these charcters but as per scenerio of this story it is all good.Also media part was not expanded that somewhat annoys me. overall you can conclude the review from my scores .it is just my opinion to the story.for any discussion or querries please cotact me . HARSHROX2

So... what's the point?It's a story about "one" high-shool student Shou, who decided to change the political system in Japan by all means (almost). He knows how these people in the goverment are corrupted and all they care about is their own profit, while pretending that they do it for the Japanese people. Japan has a huuuge debt but noone cares, because they won't sink with the ordinary, hard working people.If he's ordinary he wouldn't stand a chance, so does he have a super POWER ?No he's not ordinary, he has one quite unique power, he's one of many clones that continue to clone themself, to achive their goal. On top of that each one of them has a mask, that transfers memories to the new ones, and also, it has a bomb implanted to kill the clone.    So the clones are hunting down the evil ones, and their style is "ONE MAN ONE KILL", after they kill their target, they pay back with their own lives. (and they must kill the target only)What was it like ? The story sure is goood.... but complicated at the same time, there are times when it goes so deep down to the politics that I couldn't follow :D , because I don't know how it works in Japan and even if I did I would be confused for sure :D .It also looks that it points on the goverment in todays Japan and that it probably isn't 100% sci-fi.BUT, it really has a great plot and meaning behind it . One has to think about what's happening and how the story progress. (YEAY AND DON'T MIND THE MISTAKES , I'M NOT A NATIVE EN SPEAKER :D )