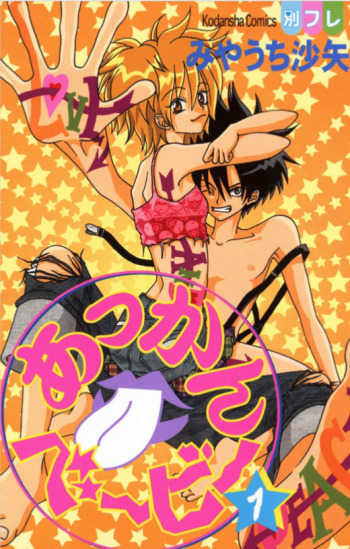 Yi Chae-Won is a high school boy scarred from being dumped by an older woman. Despite his distaste for girls that are his senior, the morning after a night of drinking, he wakes up in bed with college girl, Seul-Gi. With neither of them remembering a thing about their one night stand the pair part ways and Chae-Won thinks no more of his sordid tryst – that is until three months later when Seul-Gi turns up outside his school announcing that she’s pregnant! Taken by surprise Chae-Won panics as the university student leaves, what is he going to do and is there anyone he can turn to?

Both Akkan Baby and Say Love are about unexpected teenage pregnancies. Both also feature a certain amount of cemdy amidst the mature subject matter of both.

Yumi is a sophomore in college stuck in a relationship with a boy she’s unsure that she likes. Luckily for her, the pair mutually decides to break up, leaving Yumi free to pursue her interest in Moriya, the president of her music club. However, before she gets a chance to act upon anything, Yumi discovers that Kouta left her with a farewell gift: she’s two months pregnant! With neither of the two particularly enthusiastic it seems that keeping the baby is an impossibility, but when it comes down to it they just can’t get rid of it and decide to raise their child together. With the pair unprepared for parenthood, little money and constantly squabbling, will they really be able to cope?

While Akkan Baby features a couple that care deeply for each other and get along, both of these manga depict unplanned teenage pregnancies and a clueless pair of parents to be. Both series also show the obstacles that they must face on the road to parenthood.

Rin and Naoyuki are two teenagers in love, but despite their desire to spend the rest of their lives together their happy bubble soon bursts when Rin discovers that she’s pregnant. With a whole new set of problems to face the pair soon faces the agonising decision of whether or not to keep the baby. Then after being forced to have an abortion while she was in middle school, Hatsuhana dedicates her life to celibacy and ensuring she makes up for her baby’s lost life, but when she finally meets someone new, will she be able to forgive herself or is her past doomed to repeat itself?

Though they both have a very different tone, with Akkan Baby being more comical, both of these manga focus on the trials of teenage pregnancy.

Ichigo Oomiya was a typical teacher at Midoriyawa High School, and Kurumi was a typical student. From the get-go Ichigo thought she was boyish and had no sex appeal, and their tenuous interactions left much to be desired. However, slowly the two gravitated together and ultimately they had a child, got married and now live in the same apartment only one year later. Being young parents is hard, and both of their lives have changed dramatically. With challenges at every turn, Kurumi and Ichigo raise their daughter and deepen their bond.

In a small town in Tokyo, the PTA argues about teaching sex ed in elementary school, but what nobody knows is that eleven-year-old Haruna is already pregnant. When she decides not to tell any adults, it's up to her classmates to help her through this ordeal.

An anthology on women's and girl's issues in modern day China, dealing with topics like abortion, unwanted pregnancy, a person's dreams as they grow up - and even the sorrow of almost losing your dog.

The birth rate is falling sharply in 21st Century Japan. To combat the decreasing numbers, there's only one option left: get men pregnant. Yuki and Ryu are chosen to test a new drug that makes conceiving possible for men and are randomly paired up for the experiment. Yuki has to have sex with Ryu every day, even though he doesn't like him. However, the experiment has a condition: you can't leave the experiment until you give birth to a child. Reluctantly doing their best to get pregnant, Yuki and Ryu slowly start growing closer, but their time's running out! Then there's a new and embarrassing experiment with a loving couple, Ren and Rui, that gets them in the middle of even more embarrassing action!

One day Aiko finds herself pregnant for unknown reason as she is a virgin. Searching for answer she discovers multiple dimensions but that just the beginning of her troubles.

What if you woke up one day to find that the rules of the world have reversed? What would you do if over there, men were the ones who gave birth and raised children…? This is a gender reversal story of a husband and wife who struggles with love and child rearing. Nakabayashi Misato is a career woman working at an advertising agency, and she is troubled. Should she be prioritizing her family, or focus on her work? It was an issue which has plagued women since the beginning of time, but… Wait a second. Why do only we women need to worry about this? Men don’t even fret about these kind of stuff. What’s with this inequality and unfairness! Argh, geez! If only men will be ones to give birth and raise children after tonight’s sleep…! And thus, Misato’s grumbles turned into reality. This is the gender-reversed maternity life filled with laughter and a smudge of tears of Misato and her beloved husband!