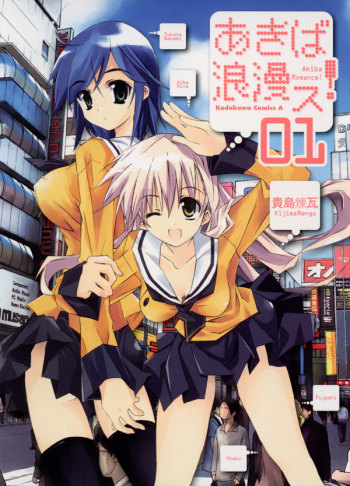 Yuuto the otaku loves two things more than anything: moe, and artwork by Sayane, the teen's favorite online artist. So when the boy is offered a part time job at a local anime shop he eagerly accepts, unaware that there, he'd run into the beautiful Kotone, an 'otaku hater' who's never given Yuuto the time of day! With newfound commonalities, the two quickly become good friends – but little does Yuuto know that Kotone harbors another secret, one that will blow his mind!

Tonari no Kashiwagi-san and Akiba Roumansu! revolve around a boy who found out that the school idol is a closet otaku. The similarity is obvous, but Akiba Roumansu! is by far more crazy as the girl has no common sense (not to mention, is a fujoshi). If you read one and liked it, the other might be worth checking out.

Follow the adventures of Nankyoku Sakura, who seems to be obsessed with anime and manga. She started her first day at school wearing a school swimsuit, cat ears, and a maid tiara and called it her "pajamas." She's also insanely rich, apparently.

Continuation of the adventures of Nankyoku Sakura, who is also known as penguin by her friends. She is obsessed with anime and manga, for example she goes to school wearing a school swimsuit, cat ears, and a maid tiara and calls it her “casual clothes”! She’s also insanely rich.

Saekano: How to Raise a Boring Girlfriend - Girls Side (Light Novel)

The up until now untold story of how Sawamura Spencer Eriri and Kasumigaoka Utaha met, as told from their perspective and how they personally viewed the events of the main story.

With Big Bro off in the U.S. spreading the good name of otakus everywhere, Shinano moves into the Maniac Road store and begins her new life at a new high school. The love of all things manga and anime runs strong in Shinano as she searches for others with the same passion.

Saekano: How to Raise a Boring Girlfriend - Girls Side

The up until now untold story of how Sawamura Spencer Eriri and Kasumigaoka Utaha met, as told from their perspective and how they personally viewed the events of the main story.

Hayashi Shoutaro is an otaku and a student who sucks at studying, the results showing on every test. And if that wasn't bad enough, he also calls out things like, the one who scores the lowest has to clean the classroom by themselves. In his class, there is a girl he likes, Kanda Yayoi, who always gets top scores and is popular among the whole class. When he arrives home after cleaning the classroom, he's met by his perverted, otaku sister who has him cross-play (cross-dressing cosplay) to go to an anime merchandise display. There he meets Yayoi, who it turns out is also an otaku, and she falls in love with his cosplay persona...?

Spoilers are bad. Especially when you spoil the favorite anime to a member of the kendo club. When Terada accidentally lets slip a spoiler about Hikami’s favorite anime, only bad things can happen. From then on, Terada can only try to survive the increasingly extreme measures Hikami uses to take vengeance. It can only be described as a war – a spoiler war.