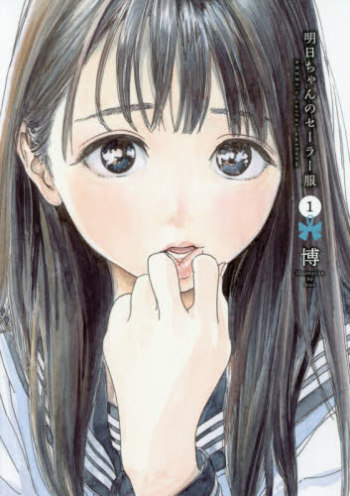 What I can definitely say is that this manga's appeal is all about the artwork and showing off well-drawn and cute images. There are a lot of motion-capture sequences, where there are like five or six images of Komichi doing some sort of activity. Sometimes, it's just showing off mundance things like fem putting on a shirt, but many times it's a lot more expressive or athletic. Komichi dances and runs around and is very flexible. You get the same sort of feeling as watching a contortionist or acrobatic at a circus, where there's a sense of beauty and even sensuality at seeing the range of motions that the human body can go through. The slightly uncomfortable part about it is that sensuality aspect. The manga will focus on the butts or the curvature of these middle school girls, and it will make me wonder whether the artist is wanting these girls to be seen as sexually stimulating or just cute. Either way, it's basically just intended to be eye candy.

Komichi has a very friendly and engaging personality, where fe will express interest in what other people are interested in and accept them as they are. Feir classmates sorta treat fem as a mixture of an idol and a friend. They just like watching fem and being around feir energy and stuff. It's a story about these girls bonding and developing friendships. And it is nice seeing the bonds growing between the non-Komichi girls as well. With the constant blushing (which can honestly get on my nerves) and delicate, heartfelt/wistful looks the characters sometimes get, the story is basically on the cusp of shoujo-ai.

After Reading this manga, I went on twitter and realized how unrealistic this story is. But I absolutely adore the characters especially the akebi sisters. This manga was like a therapy where I forgot everything and was enjoying it to the fullest. Art is top tier where most of the beautiful scenes are followed up by consistent panels. Highly reccomend this if you're looking for a series which is you can enjoy on a rainy day, some snacks and music(best experience)🤤💯