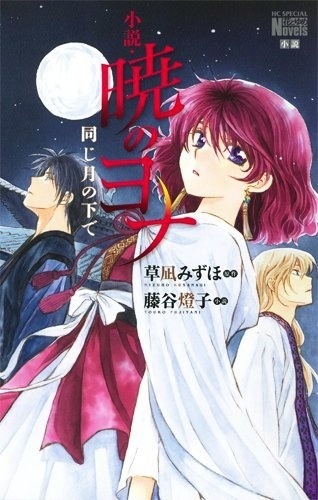 If you're looking for anime similar to Akatsuki no Yona (Light Novel), you might like these titles.

The second season of Memory of Chang'an.

The Lusitania forces continue to hold rule over the Kingdom of Pars despite Arslan’s fierce battle against Lord Silver Mask. Arslan continues to fight for his rightful throne, but there are still many conflicts left to resolve. But the biggest mystery—who are his parents? And is that an answer he’s prepared to face?

After a treaty has been signed to prevent war, Tina and Princess Rita started traveling again. This time, it is to find the murderer of Tina's family and village when she was a child to have her revenge.

Thief Tina Lothar came to steal a golden statue, but what she got instead was a princess. Royal Rita was arranged to be married to the prince of a rival kingdom in order to avert a war that would crush the country of Wellber, but after being forced at knifepoint to perform unsavory acts, Rita stabbed her husband-to-be and fled with her newfound-ally Tina. The king of the rival kingdom demanded a public execution of Rita within a time limit or face their cannons of war; so the duo, along with the AI tank Count Gyrano de Borgerac, now set forth to the neutral country of Greedom with a petition that may stop the war. Tina is acting as Rita's bodyguard and has reasons of her own for traveling to Greedom: the man who murdered her parents has been spotted along the way. With a bounty on Rita's head and danger at every turn, the pair must do everything in their power to reach Greedom alive.