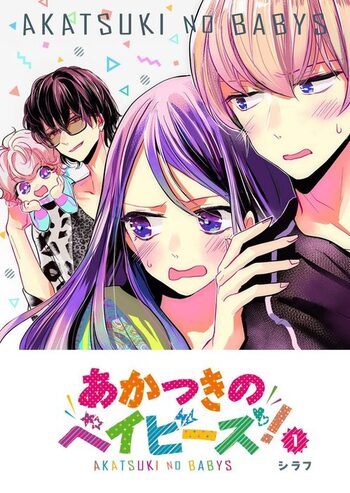 An encounter between a lonely girl and an intimidating man with a scarred face. The man turns out to be a legendary former delinquent who then busies himself taking care of the child.

Reiji Takahashi is a Special Operations Agent. While in the middle of sweeping through a criminal group's warehouse, he finds Nina, a victim of a trafficking ring dealing in child assassins named "Dolls." One thing led to another, and he ends up being assigned with caring for the young assassin (Who, coincidentally, is aiming for his life). Can Reiji, a man with absolutely zero experience with children, become a proper father to this tiny assassin and teach her how to lead a normal life? Find out in this heartwarming childcare comedy between a "hard-boiled" operative and his adoptive(?) daughter!

How to Train Your Devil

In a magical world where demons threaten humankind, a young woman with a magic sword rises up to be their champion! There’s just one problem: the reigning demon lord is a baby, and she can’t exactly slay a baby. Even if this domineering demon baby has crass tastes and evil DNA, she believes he can be turned to the side of good with the right influence. Unfortunately, she’s forced to test the theory when a contract binds her to the baby demon lord as his surrogate parent until he performs enough good deeds to prove his worth. What kind of role is that for a mighty hero? Oh, mama!

A story about a medicine seller and his son and their struggles with each other after losing someone precious to them. A father who never really raised his son because he is always out doing his trade, but when suddenly his wife dies he must adjust his solitary journey to include his son.

Serious in his work, the demon Seere prides himself on his ability to make any wish come true. What awaits him is a little girl with but one wish: “Please be my mama!!” Seere’s long road to motherhood starts here!

Comical sidestories from within the main series' timeline and featuring some new characters.

Kokoe Kusunoki is a teenager who loves taking care of children. In order to work towards her dream of becoming a childcare worker, she regularly helps out at her family's preschool. One day, her high school's idol, Mahiro Natsuna, gets a job working part-time with her at Kusunoki Preschool, and Kokoe is drawn to his shared passion for working with kids. If only they could get along.....

Bookstore owner, Otani Mitsunobu, is a scary man. That is, to the people of the Komacchi Shopping District. Then one day... he ends up taking care of a child that came from heaven and was sent by God?! And why is everyone suddenly not scared of him anymore?