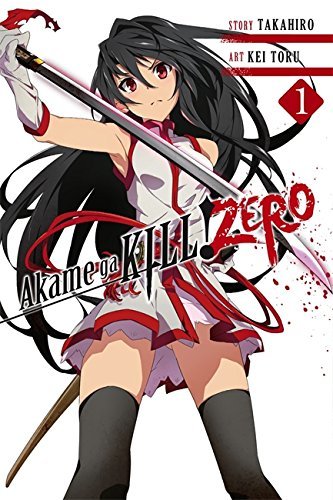 Akame ga kill! Zero is a prequel to Akame ga kill manga. The series focuses mostly on Akame and her sister, their past together when they were working for the assassin unit for the empire, and how with the reason why Akame left the empire and her sister to make the people 'happy' and join Night Raid. This series could've been read without the knowledge of the original sequel series, however i do recommend to read the sequel because it did come out first. Although it's just a personal opinion.

The story is pretty similar to the original Akame ga Kill series. Except rather than working against the empire as an assassin unit, she works for the empire. We get to see her early missions with her old squad members, and the cruelty of them. As the story goes on we can see how she is slowly changing from being brainwashed into thinking the empire is great into realizing how the empire is corrupt as she is being persuaded to learn the truth through the teachings of her enemies. Just like the parent story, it has themes of corruption, cruelty, and the sad truth of reality. Although they're are many great points about the show there are some downsides like forced and unnecessary comedy and the pointless fanservice in half the chapters. If you can look past that then it can be an enjoyable read (Unless you enjoy ecchi, which then it's another reason to read the manga). If you didn't enjoy the parent story then i don't recommend reading this series as it is pretty similar.

There were many new characters in this series including Akame's team: The Elite Seven, and the second assassin unit consisting of Kurome and a few others who are less skilled but just below the Elite Seven. There were many new characters in this series but they did add some of the old members from the sequel, such as Chelsea, Esdeath, and most of the members from Night Raid near the end of this series. Both of assassin groups working for the empire were manipulated into thinking the empire is great and needed to be "protected" by the evil rebels wanting to start a war and disturb peace and the happiness of the people. You will understand as you read the story why Akame could escape their brainwashing while Kurome couldn't. They did well in character development, although it was mostly on Akame and her sister. The new characters were 'Okay', they weren't great but some were quite likable while others were 'meh'. If you read the parent series then you would know not to get too attached to the new characters though.

The art was quite good. It was done with a lot of blood and gore, with dark themes which did pretty good with the environment of the series. Sometimes in was lazy but others it was a notch above average. You knew exactly what the author was trying to tell and didn't have to look back. The character designs were pretty average. Nothing special nor worth mentioning. But they were still well-drawn. Not bad but wasn't the best part of the series.

Overall, I give it a 7. I really enjoyed it. There are plenty of flaws but the good did outweigh the bad. It had just as much action as the original and if you wanted great fight scenes then this is a manga for you. I personally loved it quite a bit because i am a shounen fan. They're are a lot of ecchi and unnecessary fanservice which sometimes ruin the mood of the sometime seriousness of the manga, but overall it was really an enjoyable read and i do recommend you give it a try.