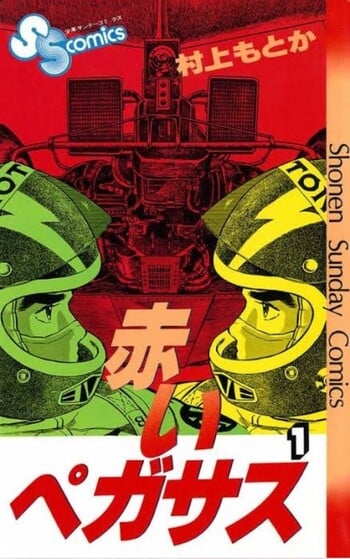 Taira Capeta has spent his entire young life being a good and dutiful son to his hardworking but impoverished widower father. Only once has his father seen him show any personal wants or needs -- when he saw a model car in a toy shop. Despite his lack of cash, his father has hatched a naïve plan to give Capeta the ultimate gift: his dreams fulfilled. From a modest beginning, Capeta, with the help of his father and his good friends Nobu and Monami, embarks upon an amateur career as a go-kart racer, aiming for the ultimate prize -- graduation into the professional ranks of formula racing. But will his poverty cause his dreams to fail?

Barrels life takes an unexpected turn the day he crosses paths with Trigger, a self-proclaimed genius of conduct. Mechanically propelled, in the adventure of a lifetime: Run day Burst, the race that crosses every continent, country and half the globe! There's only one rule: 'Put on your tires!'

When 10-year-old Kaneda Shota was involved in a car accident that claimed the life of his father, it changed the course of his life forever. Unable to afford college, Shota works a part-time job, in addition to his full-time job at his uncle's factory. He lives alone, on the second floor of one of his uncle's warehouses, and doesn't have any friends. Everywhere he goes, he rides a bicycle, with headphones to block out the flashback-inducing sounds of the cars. Due to pressures from the economy, Shota's job at his uncle's factory is going to be cut to half-time/half-pay for a while. In addition, Shota's uncle has agreed to lend the first floor of Shota's warehouse to a college club. This club is building a solar car to enter in a race, and they're hoping to get Shota to lend them his mechanical expertise. Will Yazaki Junko and the other club members be able to handle Shota's anger and bitterness, and draw him out of his self-imposed isolation?