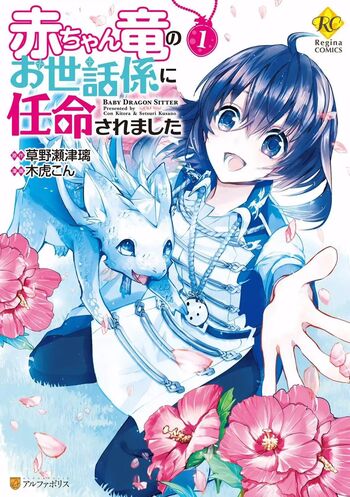 If you're looking for manga similar to Akachan Ryuu no Osewagakari ni Ninmei saremashita, you might like these titles.

Heart of A Companion

Jake Cho is a veterinarian with a unique gift: he can actually talk to the animals he treats. Being able to converse with his patients makes his job somewhat easier, but unfortunately, many of his human customers have a lot to learn about proper animal care. Whether you're a college student adopting a cute little dog, a child rescuing a stray kitten, or a wealthy gangster bringing home a giant tiger, taking on a pet is a big responsibility - a fact that Dr. Cho is determined to hammer into everyone's heads!

this manga is recommended for animal lovers. it shows both good and bad side of what animals experience when they are under people's care. it also shows some tips on how to care for our animal friends but of course you should also consult with a professional vet when needed, as not everything can work. the manga makes my heart swell with love and warmth but also ache with grief and worry when i saw the cruel treatment the animals experience. i don't know what more to say but this manga are a masterpiece

I'm Miko, a young woman who was summoned to another world as an experiment. Having been granted the ability to communicate with magical beasts, I was given the duty of expelling the ultimate human-hating dragon (which is the final boss) from the forest... Wait, that's completely absurd! But in order to get the cold-hearted dragon to open up to me, I try to get along with the beast by being friendly and talking with him -- only to have him say "your voice really soothes me for some reason, Miko" and have him become more and more overprotective of me...?!

I was summoned to an unknown world to defeat the Demon King, but my level seems to be very low when compared to the others that were summoned with me... Wait a minute, my occupation is "God?"

Living carefree at home is the greatest shortcut---My House is the world's greatest Magic Power Spot, that being the case both my house and I were summoned to another world by some guys who are aiming for it. However, I've been living in this place for many years and my body is, apparently, abnormally overflowing with magic. Due to some unforeseen circumstances by those guys who summoned me, they quickly ran away. Be that as it may, there are some ill-mannered people who covet the magic leaking out of my house.

The Saint’s Magic Power is Omnipotent: The Other Saint

Aira Misono is a run-of-the-mill high school girl, and never imagined that she’d be summoned to another world, let alone declared its savior. Yet from the moment the handsome Prince Kyle lays eyes on her, he’s convinced that she’s the long-awaited Holy Saint destined to banish darkness from his world. Aira herself maintains significant doubts. Is she really up to this challenge? She might be able to use magic, but is she really a Saint? Aira’s fears and struggles only deepen when the woman summoned alongside her begins to look more and more like the one who truly deserves that title.

The White Cat's Revenge as Plotted from the Dragon King's Lap

My life was pretty ordinary. Go to college, live in an apartment, hang out with people. But because of that pompous, irritating girl I grew up with, I got dragged into a huge mess. As usual. Now I'm in another world where she's a well-respected shrine maiden...and I got turned into a cat. How did it come to this?!

The Great Sage Damaya has been given the mission of saving the world by transporting a saviour from another world. However, instead of a ‘Samurai’ or a ‘Ninja’ or anything, he mistakenly summoned a rakugo artist. This is a story about how a japanese storyteller, "Hanashika", saves the world using Rakugo.