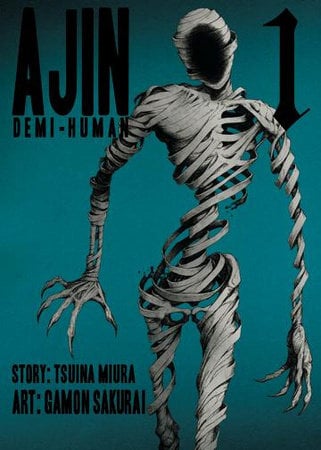 Another manga review! This time it's Ajin.

This particular manga caught my attention for several reasons. One of them is the genre. I kind of wanted to read some messed up manga with a great story where they cut eachother and bleed to death. Long story short, I was looking for something brutal.

And I can tell that Ajin was a great choice, and not some waste of time.

So the story is based on immortality. Which is an interesting topic. I mean we're all afraid of death and suffering. Ajins are only afraid of suffering.. which is a progress.

Being a super rare human with immortal superpowers is a great thing riiiight? :D . . .

Unless the government finds you and they start experimenting on you and trying to kill you in every single way causing you pain yet you can't die because you're special.

And THAT'S what almost happened to this poor teenage main character. The story follows this god forsaken guy called Kei who gets caught in a accident and finds out he's... a bit more than just an ordinary high school student.

I'd say that the story is kind of unique. I never saw a manga/anime dealing with the theme of immortality so seriously. Usually it's ''temple goddess in a bra'' or ''vixen who looks nothing like a freaking vixen''. Not saying that's bad... it just became boring to me.

Also, the story is sort of elaborate, but very balanced. Not too much detail, not a lot of confusion for the reader. Everything is explained with enough detail. No useless filler stuff...

Therefore it's refreshing to see something like this. In conclusion, the story is interesting and packed with action. I'd give it a 10/10 but it has bits and pieces I dislike.

Art is nice and polished... most of the times. It doesn't lack detail, especially on characters.

As for the genre. The story has a lot of action in it. I don't think that art catches up to that. I also don't like how the most gruesome scenes aren't drawn. There's some gore, but not enough to consider the genre horror.

So art is well done, however, it is not on the same level with the story.

There are plenty of characters. From humans/ajins to black spirits.

I really like the main character. He seems plain, but he's really analytical which is awesome. I'm just going to mention his sister. She's ugly. It's rare to see a young ugly character in anime/manga that has a POSITIVE IMPORTANT ROLE (not me) in the storyline.

Character desing is well done. I LOVE how the black spirits are designed (picture below). There is character development, but it's nothing major. I like it though, and I think that developing characters more would ruin the story.

The story is interesting, art is well done and the characters are great as well. It's not that easy to read, but it is definitely fun. And that's it! Thanks for reading my review! ^^

I'd reccommend this manga to anyone who finds immortality interesting, or to someone who is looking for sci-fi ''immortality gone wrong'' kind of stuff.

Thanks and have a nice day! ^^

Ajin is the best alternative to Death Note. I will not bother explaining the plot since it's already written there. There are just 2 things you need to know before reading this.

1. Immortality is not as same as Wolverine. It confused me at first too. Ajin's injuries will only be healed after they are dead. Also they have same life span as normal humans so if they are supposed to die at 40 with heart attack then they will. They do not live for eternity

2. It only gets good after Miura leaves the writing.

This series got pretty mediocre reputation because of cgi anime leading everyone "subconsciously" think that something CGI can't be a masterpiece. Do not be fooled by your instincts cause it is one of the smartest and most badass work in fiction. Of course just making bland statements doesn't amount to anything. I CAN give examples under spoiler tags in case anyone missed those great details but i don't think weebs today have enough attention span to read it so I'll just leave it your experience. If anyone's still curious then I'll be glad to discuss it.

For example (Spoiler): Author foreshadowed that Gen was human from start.

Honestly speaking, I cannot say enough about this story so far. Some people put it up next to Tokyo Ghoul but to me there is no real comparison. We could talk about similarities. However, in terms of story and character depth, there is no comparisons. They are like from 2 different worlds.

The art is okay, but not exceptional. Comparing it to Tokyo Ghoul this is the only place Tokyo Ghoul outshines it at times. However, I also feel it's important to say that like any manga with good art, the creator doesn't skimp on the background art. Although it lacks the type of flare Tokyo Ghoul has, it feels like the art is well matched with the tone of the story and it's main protagonist.

The characters are exceptional. Saying too much would take away from the experience I think and since this is one I would definately suggest people to try. I will keep it straight and to the point without my usual rambling on and on.

The protagonist is a outward jerk with subtle hints to his true nature that he tries to cover up and actually manages to decieve most people with. You can tell in the 35 chapters that I have had the pleasure of reading that this guy has untold amounts of depth to him. He's not a cardboard cut out anti-hero and people around him generally feel uneasy around him.

The antagonist in this manga so far seems a bit too strong for such a random guy. At first, it seems like he has a motive and we see what humans are doing to Ajin and you actually begin to think maybe he has good reasons for doing bad things. However, as time goes on he boils down to being just your common psycho with anti-social tendencies (anti-social personality disorder I mean) he knows he cannot die so he is just having fun for the sake of fighting like it's all one big fun game. It is the only thing that irritates me given the depth to this manga otherwise.

I want to believe that he is just the original bad guy and that after things are settled with him we get on to someone more worthy of the antagonist role... but now I have to just wait and see.

The rest of the characters are also interesting and have their own reasons for doing what they do both on the protagonist's and antagonists side. I don't really feel like solving things with Sado (the antagonist) will bring everything to a close. I want to say this is just the beginning but I cannot be sure. All I can do is hope... so as of now my overall score is 9 and as time goes on I may add a few updates to my review and change the numbers but as of chapter 35. This manga has me seriously hooked. I suggest that people give it a try!

A short while ago, people found out that there are immortals among them, who are hunted down because they're dangerous (according to the government, at least) and because people like experimenting. Rumor has it that you get a huge bounty for capturing or giving info on these Ajin. Not the most interesting rumor for Kei Nagai, our main character who seems to be somewhat apathetic - until he discovers that he too is an Ajin.

What follows is an interesting ride on which you encounter other Ajin (who may or may not be friendly), discover more about the Ajin's abilities, and get a look at what the government is doing with Ajin. It's not a ride I want to get off soon, because it manages to stay entertaining.

Something also worth mentioning is what for lots of people would be the main attraction: the violence, which shines in the dark atmosphere of the manga. Be it torture, murder, or fights against or between Ajin, they're all brutal yet nice to see. It's also cool how the Ajin fight, using their immortality in intelligent ways.

Just as important as the story is the way the characters are explored upon: not just the Ajin, but a good deal of regular humans as well. They are largely interesting characters, with a lot of time spent on what kind of people they are and how they develop. Questions like "what does realizing you're immortal do to a human's mind?" are of course important for the Ajin faction, but there's also the humans and the question of "how do you deal with the fact that some people are immortal?".

A big remark is necessary for our main character, Kei Nagai: some people find his initial "apathy" dull, and even drop the series only for that reason. However, his character does change into something else... but no spoiling from me on that part.

Also of note is Sato, who is a constant source of entertainment - seeing his schemes put into practice is always damn nice.

The artwork in this manga is also quite good - both the designs and the fights are pleasant to see. The artwork also fits well with the atmosphere.

Ajin delivers a well-thought out story with a strong emphasis on how brutal the world is, but doesn't forego character exploration and development. It's an entertaining read, and definitely one I recommend.