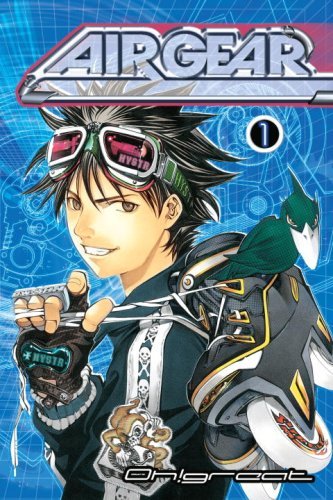 Story: Air Gear started off with an interesting premise with the concepts of ATs and flying. However, it fell flat. The ideas weren't developed and some were plain incoherent. It is interesting and has plently of humour, action and some romance. However, it wasn't that special. Each resolution felt "meh" or ".......really". I had trouble taking the explanations seriously. In addition, the series tries to have profound moments but falls short. All in all, it was ok but there are much better series out there.

Art: I liked the art for the most part but I felt the ecchi was too much. I do admit that I am not a fan of ecchi (which does question why I continued to read it in the first). However, I am willing to accept some of it if it adds to the series. It's just seems like poor taste to me instead of being done well. If you do like fanservice (lots and lots of it), then this would be a good read.

Characters: Just like the plot. They are all over the place and not done well. I liked a few though. The relationships are partially developed but sometimes just don't make much sense.

Overall: It's a pretty mediocre series but has a decent amount of action and comedy. The art has it's highlights and has a lot of fanservice. It's not completely awful but I wouldn't recommend it.

Very nice character design. Story is also good but at the end of final chapters there is a liitle bit of rush to end the story. Many questions are still a mystery in this manga. Adult materials are also a little bit included. A squeal is highly recommended.

This is an amazing Manga as well as an amazing Anime, i wish that they woulg carry on till Ikkie goes to the top, i hope they do.