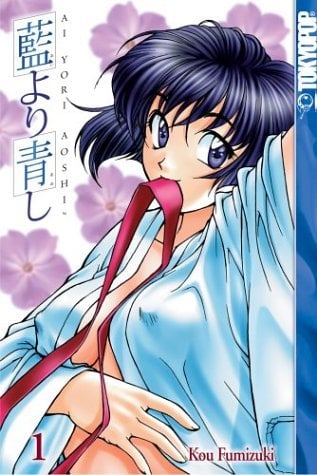 Urashima Keitarou is a loser. He's failed the Tokyo University entrance exams two years in a row, and his parents have finally kicked him out of the house. Penniless and destitute, he travels to his grandmother Hinata's inn, hoping she'll put him up until he can get into Tokyo U and fulfill his promise with his childhood sweetheart (whose face he can't even remember). Unfortunately - or perhaps fortunately - it turns out that the inn is no longer an inn...  it's an all-girls dormitory, as he discovers in his typical blundering fashion by grabbing an eyeful and more of every girl in the place!  Narusegawa Naru, a fiery-tempered high school student and the first victim of Keitarou's lewd bungling, wastes no time doling out brutal punishment and preparing to kick him back out to the street.  But wait!  A letter has come from grandma Hinata, and Keitarou is to be the dorm's new live-in manager!  Is this a blessing from heaven, or has he been cursed to a living hell?

These harem manga are two of the few harem style manga not about high schoolers. The style and focus are also very similar being more romance than comedy but not skimping on the comedy.

Both Love Hina and Ai Kora are very similar. Both feature a "destiny" plot in which the main guy and the main girl are supposed to be together. The only difference between the two is that in Ai Yori Aoshi, the girl actually wants to be with the guy. Both are sweet, comedic, and all around good romance stories.

To me, both of these manga are perfect examples of the harem genre: each is about one guy who has to deal with a group of girls, and the universe makes things difficult for him. Both have romance, comedy, and small amounts of drama thrown in. If you liked one, I'm certain you're enjoy the other.

Maeda Hachibei is unlike most guys, who lust after gorgeous girls. This pervert lusts after their discrete parts, instead. When he moves to Tokyo to attend school, he finds himself living in a dormitory with five girls, each of which possesses one of the ideal physical features he desires: gorgeous blue eyes, bullet-train breasts, a deep dulcet voice, straight “anime-esque” legs, or a waistline shaped like fine Japanese pottery. How can he manage to keep his wits when surrounded by these women?

Both are good harems that don't spare on the comedy. Ai Yori Aoshi is more of a love story than a harem, and Ai Kora is more of a harem than a love story. Regardless, if you like the essence of harems and lots of comedy you will like either one.

Both stories are harems, of sorts, where the primary love relationship is more or less evident from the start.  The rest of the girls mostly provide comic relief.  Ai Kora is much more absurd in its humor and much less poingant in its moments of truth, but both have the potential to make you laugh and to tug at your heart strings.  If you liked one, the other is at least worth a perusal.

They're both ecchi harem with a caring female lead (a sudden girlfriend appearance in Ai Yori Aoshi). They tend to be a bit explicit but both stories are very good and well written. I'd say Umi no Misaki can offer a bit more with a nice touch of mystery; Ai Yori Aoshi leads towards the love relationships to the point where it could be too lovey-dovey depending on the reader's taste.

Seiji Utsumi is a wholly unathletic boy who is infatuated with Iketani, a bubbly and pretty girl in the school’s tennis club. Unfortunately, while he knows exactly how to get the result he wants in dating sim games, he has no intention of attempting to approach his real-life crush and is simply satisfied to admire her from afar. One day, however, the new beauty in his class, Yuki, learns of Seiji’s affections for her senior in the club and takes it upon herself to help him in his romance - and the first step is to get him to join the tennis club! Now Yuki is coaching the lovestruck teen in how to win his love, but are her intentions true, and will Utsumi be able to get the “Good Ending” he desires?

If you want a nice change of pace, I recommend you reading GE - Good Ending. It's not a seinen, it's a shounen with a  love triangle, but let me tell you it doens't feel like a childish read. Good Ending involves a lot more drama and even psychological aspects, but at the end of the day it's a romance shounen. The story is enjoyable and if you like it like I did, you'll want more and more to the point where you just want to see nothing but the ending. A good ending perhaps?