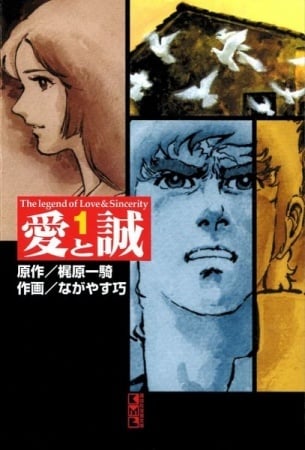 If you're looking for manga similar to Ai to Makoto (Ikki KAJIWARA), you might like these titles.

Jesus is about a high profile assassin who plans to fake his own death, laying low from all the mafia hitmen and the FBI that are after him. He plans to live the rest of his life with the money he could get from smuggling the drugs he stole from the mafia gangs - one of the reason he is chased. His plan fails and he couldn't get those drugs his old time friend hid for him, because they somehow happened to be concealed in a school's wall, with a super strength blackboard in front of it. He has no choice but to pose as a high school teacher to guard his stash, trying his best not to get caught while being involved in crime cases.

Taking place in the floating city which was established as AHQ, Mega-float. What is the true nature of this "Magic" used in the near future?

Beginning in a little town in Hiroshima, childhood friends Ren and Kiyoharu aren't just partners on the Kagura (Shinto theatrical dance) stage, they also spend their days fighting together in perfect sync. Until one day, opportunity comes knocking.

Akashi Eito has failed miserably on all high school admissions exams but somehow, he receives a letter of acceptance from a school he does not remember applying for. He nevertheless happily enrolls, expecting to live the ideal school life, but his aspiration are quickly destroyed as he discovers that this mysterious school is a training institution for secret agents! Immediately, Eito wants to return home and live a normal life with his normal family, until the director of the school makes a shocking revelation: Eito's deceased father was also a secret agent! He subsequently wants to know more about the past and memories of his father, so he decides to stay in this school. However, as a student of this institution, Eito will have to face a deadly exam made to test the skills of all new students...

Do you ever feel like your teachers are too strict? Well, do they shave your head and beat you if you talk back? Then they're not as strict as they are in the world of U19! The Grown-up Party credits itself for rebuilding the country and blames the lazy youth for ruining everything. They decide to teach them a lesson come hell or high water! But there are some that rebel...and may have super powers! It's complicated!

Until Your Bones Rot

The summer they were eleven, they killed a man and buried his body in a cave. Since then, every year, one summer night has marked a ritual: a ritual never to forget, and never to betray. Five years have passed. Their sixteenth summer. The body, now a skeleton. Unravelled lies. A faceless blackmailer. The phone rings, and a life is torn apart. The bones, like their crime: never rotting, never fading away. Now, a living hell begins.

Mayu and Nobu have been best friends ever since they were kids, always the best buddies. But the friendship does not only include these two boys, along them is the other childhood friend, the introverted Yuiko who always has been some sort of damsel who the boys have always helped. Upon entering high school the trio meets the grandchild of the chairman, the student council president nicknamed "The Rooftop Princess" and who is considered a perfect girl in every sense.

Forget Me Not (Nao EMOTO)

After an accident on his scooter, Yusuke Serizawa awakes to find himself in a hospital bed. The cause of the accident—the sight of a familiar face that distracted him. However, it turns out that the person who distracted him was also the person who called the ambulance for him, and whoever it was won’t reveal their identity. All Yusuke knows is that this person is a woman from his past—someone that he loved and possibly wronged. Now Yusuke must search his memories of the women in his life to discover the identity of his guardian angel. Will Yusuke be able to find the true identity of this woman and rekindle the flame of a past love or will this woman forever remain a mystery, lost to old memories?