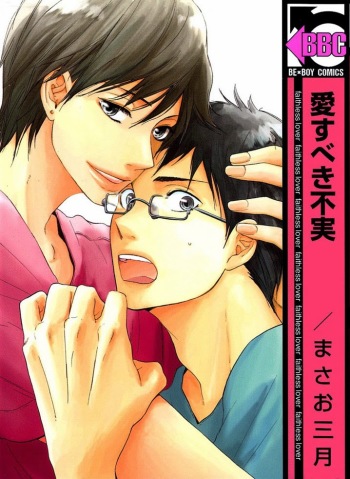 What He Doesn't Know

Hiromu's head over heels for his boyfriend Taiyo, but he's been keeping a secret from him... parts of his body pop out when he's excited! Unfortunately, this means that every time Taiyo tries to hold or kiss him, he's gotta run... even though he definitely wants more!!! Read on for a mix of steamy stories about six cute couples who are simply bursting with love!

How to Score Your Favorite Teacher

High school math teacher Mr. Majima is skeptical about Itsuki Wakana, a student who always fails everything, actually getting the most difficult problem on the mid-term right, especially since the rest of the paper was left blank. So, he does what any good teacher would do... and accuses Itsuki of cheating!! Hurt by this "undeserved" accusation, Itsuki makes a bet with Mr. Majima to prove his innocence: he's going to retake the test and ace it... as long as he gets to score with Mr. Majima! This is a collection of stories including a sweet teacher and a cocky student, a "prince" and a "princess," and a TV anchorman who ends up having a night to remember with the weather forecaster.

Izumi is getting sexually harassed by his co-workers... How will his boss react?

Typical school boy Shibutani has always had trouble staying interested in his girlfriends, but when mild-mannered Yoshizumi transfers to his class, his interest is strangely piqued. As Shibutani tries to get to know his new classmate, he finds Yoshizumi to be awkward and even hostile...

Tamaki Ouga always breaks curfew, and always get caught by dorm leader and student council president Mitsumoto Hizuru. Tired of being punished, Tamaki is determined to charm Mitsumoto, but finds himself drawn in by the strict and enigmatic president.

Why does Kei pick Setsu up everyday and then ignore him at school? Setsu wonders is he special or just a bother.

Taku is in love with his childhood friend Hiro, so when he's invited to Hiro's house whilst his parents are away he plans to do something about it. However, it seems Hiro has something similar in mind!