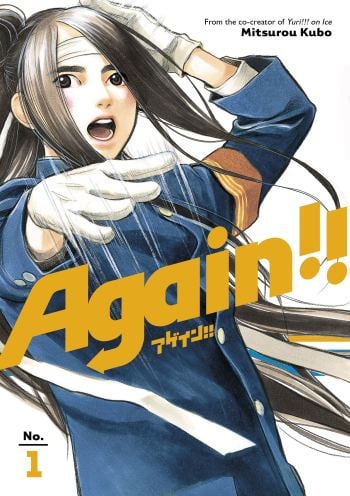 I read this for 20 chapters and I may come back to this manga but I felt it was very boring. The manga is about 2 3rd year students one a failure and one popular having an accident and both of them somehow travel back in time, back to 1st year. This premise has being done so many times and if you do it right it can be a wonderful and deep storey amount re-living your life. The twist to this manga is that it’s about an old style Japanese cheer-leading club that is failing and the failing student always wanted to join so he uses his future knowledge to make it popular. Like I said before it’s really boring I feel there’s better manga’s with the same idea that would be better. The characters are boring and I feel it’s too focused on the failing student and not the popular student who at one point becomes a background character, there’s a possibility that she gets her own arc later on, but this manga didn’t pull me in.

One of the worst sentiments a manga reader can express is "I really loved the beginning, but then..." That's how I feel about this one here. I might even rate the first story arc as a 10/10. I get shivers in the opening chapter, when Usami first walks on the stage and my heart's all like "Imamura can actually have a relationship with her this time around." Gah, I love Usami! What a cutie! And I find the initial storytelling engaging and endearing. But there are several turning points where the manga got worse. The first turning point is after chapter 32. Up to that point, it was a nice, sweet redemption storyline, but once the idea of co-existing timelines cropped up, it started having a feel-bad taste. And over the next few chapters, it became clear that the best this story could achieve was a bittersweet ending--a happy ending was made impossible because of how the mechanics of the do-over worked. The second turning point is at chapter 63. We get another character who's revealed to have entered the do-over timeline. All of the crossover between timelines makes the story worse in my opinion. It does add some depth and less linearity to the storyline, but it also just adds extra complications (which aren't dealt with well). The final turning point is chapter 107. It's at this point that it became clear that the manga had no interest in maintaining a coherent sense of chronology and was more concerned with the inter-timeline travels having surface-level intrigue.

In fact, looking back on the series, the way that the two timelines feed off each other isn't ever adequately explained. Like, it feels illogical for some of the stuff to happen. Why do people start forgetting Imamura in chapter 36? How does Suzuki see flashes of the alternate timeline in chapter 58? How does Imamura see flashes of the future within the current timeline in chapter 100? Why does it rain in chapter 101? What's up with the three years in chapter 107? Why are the comas seemingly dropped from the story after their initial use? Why does Imamura travel forward within the same timeline in chapter 129 rather than traveling to the co-existing timeline as was the case previously? Why and how did he return to that specific moment in chapter 133? Why did he return to the beginning of the day in chapter 136, and how does memory loss and continuous consciousness play into all of this? How many timelines are there in the end, and are they all still co-existing or have the others dissipated? And why does Usami say "It'll happen again if you associate with me"? What'll happen again? And how was associating with her the cause of "it" happening the first time? I know we have to be willing to suspend our disbelief to a certain degree, but that doesn't mean incoherency and inconsistency within the "magic" is acceptable.

The first time I tried reading through this manga, I started losing interest somewhere in the sixties and I dropped it entirely somewhere around the late seventies or early eighties (when the Hanataka storyline was still building up steam). And during this most recent read-through, I noticed that just like the last time, my interest precipitously fell during that transition period between story arcs and I had trouble latching on to the new plotline the author was trying to introduce. But eventually, I did latch on and I ended up getting really into the story arc about the I Want To Die musical. I experienced a similar drop in interest during the transition between that arc and the final one about the marathon. Clearly, this manga has issues with its transitions. The manga also has issues with bringing its storylines to satisfying conclusions. Each of the arcs had endings that fell a bit flat (which ties into the failings of the transitions) and the ending of the series itself was a complete disappointment. I'm especially upset about the lack of a romantic resolution, since that was one of the things that got my giddy in the beginning. But there were still enough exciting and fun moments in the meat of the story that I feel a positive score is deserved.