After the Rain - Reviews 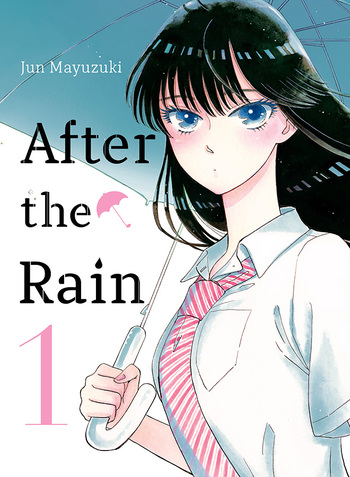 Just a forewarning that this manga probably got axed based off of how the ending was presented. Emphasis on HOW it was presented. The contents and result of the ending are probably pretty accurate to what the author wanted for this manga when they set out to write it as far as I can tell.

After the Rain is at first glance a romance manga with a significant age gap. It's published in a seinen magazine and it has a 17 year old highschool girl falling for a 45 year old man who's divorced and washed up. But there's a real message trying to be conveyed in the story that isn't about romance at all. It's about life.

The plot is mostly slice of life with little tid bits of romance as well as elements of coming of age, and just life in general. I don't really want to spoil the main take away you get when you finish the manga, so that's about it for this. Just know that the main plot may be an age gap romance, but it really isn't about that. (If you've read Vinland Saga, it's kind of like how there's a lot of violence and action in the first part, but that isn't what you should be taking away from the story).

The way information is presented in this manga is almost always by letting the viewer infer information from what they see, rather than having the info dumped onto them directly. Which I GREATLY appreciate. This is something that I've been taking for granted lately since I'm pretty picky with what I read and watch lately, so just a good thing I'd give for the manga.

The pacing is a bit janky at times, but it's mostly fine except for the ending since the manga probably got axed. The author seemed to have written about 2/3rd of what they wanted to, so the result of the ending makes sense. However it also lacks punch since there wasn't proper build up, hinting, anticipation, foreshadowing, etc. Honestly if the author hadn't gotten their story axed, the plot probably would've been 8/10 and maybe even 9/10, but for now the plot holds a 7/10.

I don't really have anything to comment on the art since I feel like as long as my eyes didn't get gougd out from reading it, or the background scenery isn't insanely detailed and beautiful (One Punch Man, Otoyomegatari), then there isn't much to say. The art style is kind of shoujo manga-ish, but it could also be seinen as it is published in a seinen magazine. It's nothing too special and the anime actually looks much better relatively. So go watch that if you want to feast your eyes on some prettier characters I guess. A 7/10 for being a bit above of what I arbitrarily feel is average.

The characters are a bit tricky because some of them could be 8/10 almost, and others are maybe 5/10 on a good day. I think ultimately the characters could've been a 7/10 at least if the author didn't get their manga axed, but it is what it is. The main characters are a 7 or 8/10 on good chapters. Their backgrounds get fleshed out gradually and properly. They get developed MOSTLY, but are stopped from reaching their full potential from the axe. You could probably take decent approximated guesses on how they were going to develop based off of the ending though. Just gotta imagine that last 1/3rd of the story somehow.

Anyhows the rest of the characters vary from like 4/10-6/10. Like Nishida (the female blondie serving at the restaurant) gets a 6/10 for having a basic back drop and develops into a different character by the end with proper explanation of how it happens. The blondie working in the kitchen crushing on Akira at the start gets a 4/10 for having little back drop of who he is at the start, and although he develops into a different character by the end, it isn't by very much and it's vastly unexplained due to the manga getting axed as far as I can tell. The same can be said for many of the other characters that have some sort of presence like the university blonde chef, or Akira's track friend. They run only at numbers like 5/10 since they have unfinished plot lines that didn't get wrapped up properly due to the axe cutting the manga's run short. I'm not including characters that are pure background decoration, like the black haired chef and middle aged waitress who literally get 0 fleshing out or development. Reason being because there's not an abundance of these characters to weigh down the atmosphere of the manga, nor is the focus on them anyway. Overall the characters are a 6/10 since there are some slightly good/decent ones, and a good amount of meh ones.

Overall despite getting axed, this manga is pretty solid. The exposition is executed with thought. The characters and plot are thought out from start to finish. And the final message you take away after reading it leaves you with much more than you'd probably hope for from reading the summary of what seems to be a deviant age gap romance. A 7/10 that likely could've been a 8/10 if the author wasn't screwed by their magazine cutting them short. Maybe even a 9/10 depending on what they had in store.

That's all for my rant. If you'd like to read more of my thoughts check out "freakattaker"'s comments on the MangaDex page of this manga.

Ends as a story about life and how feeeilings develop betweem people.

Though you may immediately rate it as some perverse fantasy of the writer, the story really isnt about the romance between a High School Girl and a Middle Aged Man. A quick overview without any spoilers. The girl Akira, has a crush on the manager of the restaurant she part times at. After losing her ability to run in due to an injury, she finds comfort in working at the family restaurant, and has taken a liking to the middle aged manager, Kondo. The writer portrays this as just a simple crush of a teenage girl.

Akira after losing her position in the Feild and Track Club, finds comfort in spending time with a Mature, Kind and Aloof, manager, even if he is in his 40's.

Kondo, though not actually interested in the High School girl, finds that spending time with her teleports him to the past, She reminds him of his younger days as a Teenager. He doesn't like this girl the same way, but the idea of a 17 year old, like an old man like him does make him happy.

I highly recommend this series its a quick 10 Volumes, the ending is a bit adrupt though. TL:DR, This is the story of that one time this 17 year old, had a crush on a 40 year old. But eventually nothing came out of it. The Destination is irrelevant, it was  all about the Journey.

One of my favorites, it has a beautiful message.

Certainly, this has some problems such as the rushed ending and some characters/side stories being incomplete, but there are lovely moments, good reflections. The ending is what we could already expect and I think it was for the better, their timing was just unfortunate.

Sometimes loving is to set free the other person. I'm sure it will stay a precious memory for both (also for me) and a reminder to chase the things you like even if it's scary and hard.

The ending was abrupt but both leads intereactions were cute enough to call this wholesome regardless of their age gap!

It's all good but you shouldn't think it is about romance (not at all). Well you ll at the start but that is it. And on the half way through you ll probably predict how will it and. Thats all.