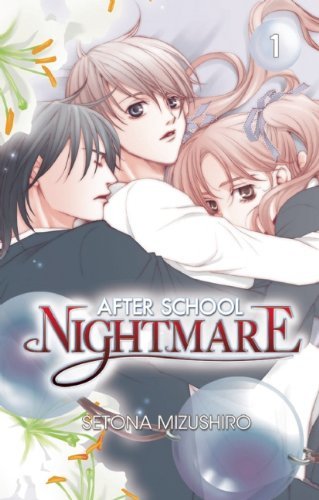 Ichijou Mashiro seems to have it all - he's popular, good looking and attends a prestigious prep school. But Mashiro has a secret - he's neither male nor female. So far, Mashiro's been able to live his life as a boy, but all this changes when he's informed of a new class he must take in order to graduate. Mashiro is told to find the Key to graduate, and the only way to do so is to enter a nightmarish world with several other anonymous students in a twisted group therapy session. These terrifying after school classes will challenge Mashiro's notions of friend and foe as his body and soul are put at the mercy of the worst kind of enemies: his classmates!

I have read this manga the last week, and I must say, I would have never thought it would end like this - nor the story, nor my feelings towards it. First of all, it was labeled gender-bender. I am not a big fan of the genre. Girls who look cute in boys' outfits? Not for me. Then came the biological twist. Mashiro's upper half is male and the lower is female? That was so ridiculous in my eyes. He's just a boyish chich with no boobs. :D The first chapter was very confusing, but at the same time, it captured my interest. I wandered what all the crazy stuff was about. There was one more point that I really disliked - the incest. But I got over it, and I'm glad I did, because without that part, this story truly wouldn't be good. What I really admired in the whole manga was the characterisation. Every last person in this work is like real people - they have good and bad sides and habits. Some have scarier sceletons in their closets than others, but all of them represent real people. And the story is all about overcoming your fears, your insecurities, and realizing that you only have one purpose in life: to never give up and always be true to the person you are. I loved the three main characters. At first, Mashiro annoyed me because he was a girlboy who claimed to be a boy but acted like a total girl. It was so facepalm! But real, too, considering his/her insecurities. Sou was a mystery present, unwrapped slowly as the story progressed, and turning out just as, or even more, human than everybody else. His character captured me in the beginning, in the middle, and in the end. Kureha I also liked from the start - she is cute, beautiful even, but inside, she is more insecure than most girls. However, she tries, she constantly tries to overcome her fears, she stops lying down to her phobias and in the end, she rises as the strongest character of them all. The people were deep, they evolved, and became humans true to themselves. The character development was fascinating. And as a characterization junkie, whenever a story has real characters readers can relate to, I always say: WIN! And this story had good characters, a good plot, and a good general story. The idea was brilliant, and the ending, when we found out about the reason behind the whole school, was so ingenious I almost teared up. I can only recommend it to anyone. Even if you don't like shojo, gender bending, incest or fantasy, you have to read this. However, if you're a fan of cliché plots and characters and like easy romance stories with a strong male and weak female lead, or you hate good fight scenes, this is not for you!

I remember starting this manga a while ago and dropping it because I'm not a fan of the gender bender type of manga. However, I picked this up again recently and realized that I was missing out on a very original and captivating story. Story: This story features a very interesting mix between shoujo themes, such as relationships and falling in love in high school, and psychological horror themes, like paranoia, dark secrets, and deep rooted hatred. Because of this, the whole entire story tends to feel surreal, like you are watching a dream. Considering the fact that one of the key plot devices is dreaming, this only enhances the manga, not detracts from it. There are many twists and unexpected revelations that make this manga all the more interesting. The mangaka is constantly playing switch and bait with identities. She will show us a side scene that the main character Mashiro is not privy to, setting it up as the truth, and then revealing that truth as a farce, leaving the audience just as bewildered and left in the dark as Mashiro. It does get kind of confusing at times, but part of the fun that comes from reading this manga is trying to guess where the story will turn next or the identity of a certain character and then being proven completely wrong. I will say that sometimes the portrayal of Mashiro's hermaphrodite status isn't done well. At times, I wonder if the mangaka realizes that not every transexual needs to decide on one gender over the other. Also, Mashiro has a very stereotypical idea of what a man and what a woman are. This isn't that bad since it is used to illustrate Mashiro's warped way of thinking, however, at random times, other characters make comments on what a man or what a woman is that unfortunately categorizes each gender by stereotypical traits. Then there is one character who I still can't decide on whether or not I am comfortable with his decision to tell Mashiro that he loves and sees him as a woman and that he needs choose to be a girl when Mashiro is so obviously conflicted. Telling a person which gender to identify with, even if it might be what they secretely desire, does not sit that well with me. Still, the manga does a good job at addressing a subject that many in all forms of art tend to shy away from, so kudos to her. Art: Good. I've seen more detailed art, but I am partial to this simplistic style as well. Mizushiro is really good at avoiding copying the same face onto different characters and making each character introduced stand apart from the others. The changes between character designs aren't huge, but the differences do go farther than changing the hair style/color. Also, points go to Mizushiro again for making Mashiro accurately androgynous. I've read Ai Ore! by Mayu Shinjo which features a girl who is supposed to be considered androgynous. What occured is that whenever the girl was supposed to come off princely (usually when she was in her all girls school) she would have the physique, stature, and bone structure of a male, right down to the narrowed eyes. Whenever she was supposed to appear feminine, (usually around her boyfriend or other guys), her physique would slim down, her shoulders would be less broad, her breasts would get a slight emphasis, and her eyes would widen. Mizushiro on the other hand is able to give off that androgynous look without all of the alterations. Mashiro stays the same size, same height. Only a few times does her chest suddenly get bigger (usually for some cover art) and her neck/Adam's apple would get played down. Other than that, he's basically the prime example of how to portray androgyny well in manga. Characters:So there are a good number of characters in this story whose journey helps explain the world Mizushiro has created. We are given insight into their lives and realize that all of them are more than just a stereotype (Kid Genius, Ms. Responsible, The Gentleman) and each of these characters has their own dark hidden inner feelings. However, this could not be more true than with the three man characters: Mashiro, Kureha, and Sou (and one other character but that would be spoiling) There is no such thing as a perfect character in this manga, but these guys are the most complex. Each has their own conflicting opinions about themselves and life. Kureha and Sou both have their darker, more uglier, sides exposed and Mashiro, who lives his life the way he *thinks* it should be instead of the way he wants it, is constantly being called out for his hypocrisy and indecision. Most of these characters become aware of their faults and Mizushiro very realistically portrays how people try to move past their faults in order to live. As a psychological story, character development of the deeper kind is only expected and Mizushiro does it well. Overall: A very interesting story that makes you think. It's not the kind of story that can be read without really thinking about the themes and the decisions each character makes. Also, there is a heck of a lot of Freudian symbolism in the art that is also interesting to think about.

Moshiro Ichijo is a high school student whos body is half female half male. One day he is called down to a secret infirmary to participate in a special class. He need to find a key to graduate from the class. The class starts when everyone falls asleep and they apear in their true form of their soul in the dream. When each person reach their personal goal, their most heartfelt dream will come true. Mashiro decides to use this class to become a real male.