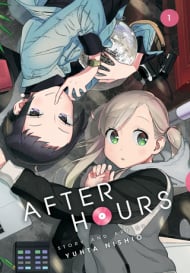 The club is hopping and Emi isn’t… so she ends up hiding in a corner after her friend ditches her to flirt with a guy! Emi figures the night is a bust, but then someone amazing comes to her rescue. Kei is a DJ, and her effortless self-confidence captivates Emi. Is this the start of the rest of her life or just a wonderful night out?

As a genre, yuri--wonderful though it may be--is, it seems, a game of inches, a few details in one direction or another separating clichés and narrative redundancies from the beautiful and thoughtful. And while the true fan will watch someone sputter "b-but we're both giiiiiirrrls!!!" to herself a thousand times and love each as though it was the first, that doesn't mean he won't appreciate a well-placed deviation, when it comes along.  And so--enter After Hours, which, in just the first few pages, pats the genre on the head and tells it to run along home before it gets dark. Because this is a series that refuses to array itself in beloved bog-standard girl-girl regalia: no sputtering, no hand-wringing, no non-committal ambiguity.The difference, here, owes to the ages of the protagonists: these aren't virginal schoolgirls stumbling through their proto-sexual awakenings, as is so often the subject matter, but, rather, adults with some amount of romantic experience under their belts already--and, as such, their story is less about pining and the exciting confusion of "what are these feelings???" and more about...well, connection. Companionship. Happiness. All the mature stuff that relationships are about once you've outgrown all the self-aggrandized expectations and milestone-centric bull**** that comes with being new to dating. And that's just the first volume. Which you should absolutely--absolutely--pick up. ...and then pretend is the only volume of the series. Because...hoo-boy. See, what follows on from this remarkable first five chapters is a revelation that Volume 1 is, in fact, a facade: a yuri Trojan Horse filled with, of all things, a DJ-ing manga--and not a particularly interesting or detailed or meditative DJ-ing manga, at that. There are no insights or deep-dives or contemplative looks at the world of DJ-ing, just the surface images thereof, as though the characters themselves--though actively involved in this world--do not have anything more than a cursory Wikipedia brush-up at their disposal. It's shallow and dull and, worst of all, entirely removed from the unique romance it lures you in with. Which, given its early potential, is quite the disappointing turn. Particularly when the bog-standard girl-girl tale it so effortlessly avoids, at its start, would have, ultimately, been the more captivating tale.

The whole story really only has the 2 main charactors in mind. There is not a lot of drama but it is a nice sweet read. The art is very nice and the plot is very unique. I enjoyed it.

One of the sweetest love stories for both romantic main plot, Emi's character development subplot, the realistic portrayal of events, and the flow which sets up for Kei as the subject of an interesting character analysis. The moment(s) were sweet, and the music listed in the experience only heightened the senses. I keep thinking about their expressions of interest towards one another, their moments stumbling through life together, the mutual passion and breaths together. That's what I mean by sweet. It, After Hours, wasn't only a primer on Tokyo-underground-DJ-rave music culture, but also satisfying in their romantic infatuation, emotional growth, development, and honest love.   So yes, After Hours is great at being a distinct voice of romantic relationship and companionship, with honest, more adult development. The underground music scene is definitely glib, surface level notes... But the relationship and the characters are why you ventured into romance, and can enjoy yuri- not for the romance to be a facade for a music industry piece. P.S. More still, I would read this story again. I happily recommend it to those who value a realistic love story where the romance isn't the focus: there's value in the characters, their friends, their decisions, and their world. I would suggest it to those that value emotional and psychological conflict, to a modicum, in combination with their romance. I wish I could find more about the author, Nishio Yuuta, just to pay the person and gain more of their work. This was so satisfying, so sweet, and so refreshing for being a distinctly comfortable story and execution. Thank you for giving me something that makes me feel human, and reminds me that art pieces can be touching and human.