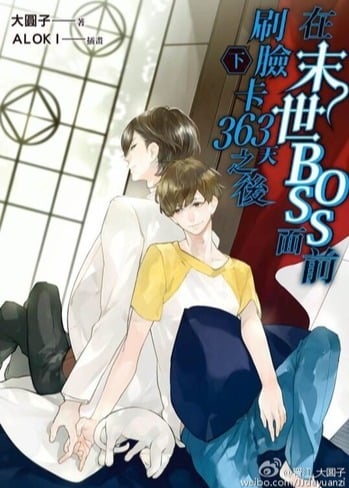 In the most popular 3D keyboard online game “Tomorrow”, an ordinary player, Zhang Zhiyin has a less common hobby–that is to visit Dr. Y, the ultimate boss – giving him gifts and hugs. As a game produced NPC, the other side naturally has no response, but Zhang Zhiyin still insisted on visiting him rain or shine for 363 days. Until one day he decided to give up the game, the result was being hit by a car. Since then, he has been dreaming every night in which he will cross into the realistic world of ‘Tomorrow’ and return to the magical journey of normal life during the day.

If you know me I have a problem with everything, So. Starting with the story, I liked it in the beginning. The idea and concept made me open the book and I was intrigued on how the author will go about expanding the story as well as romance. However, the story was super boring and it dragged on. I can hardly remember parts because of me trying to find motivation in other media. In the beginning I loved how Zhang Zhiyin acted. He did want what he wanted to for no logical reason and accepted everything with no complaint "Oh yeah whatever in a different world? Cool." kinda attitude. However, the whole story just screams Mary Sue. How he is a literal player in the world. He just buys items from the store to get out of situations, how he can't die and just gets back to his save point, how he uses items to get stronger. There is hardly any action, he doesn't die, he doesn't really need to get stronger, he has loyal comrades that got his back, he can go back and forth to the real world, the only problem is the item store sometimes fails and comedic moments. That's not to mention Dr.Y (the supposed boss in the game and ML) who gives him super powerful items and always watches him making sure he's okay, and he was never the villain to begin with, he was already in love with MC before this. The villains are just canon foddlers who pass by as they go, they change as soon as one is gone, nothing too hard just to push their relationship further. The worst thing that happened was when Dr.Y had amnesia, which was cliche and ended with hardly any conflict. However, I did like the plot twist to who Dr. Y really was and how he came to be. It was surprising to me and the idea was well fleshed out, it was the main plot device to move the story further, ZZ handled it well and all. I did like how they explained the transmigration which they don't explain in other books, this one actually makes some sort of sense. This story is just to fill you with fluff so if you like that this story is for you, but if you're here for action, well, read something else this hardly contains real battles with ZZ. The ending was also abrupt and left me unsatisfied, I wished to see more with a more detailed ending.    As for characters, bland, for lack of a better word. Zhang Zhiyin, was interesting at first with the way he acted and was considered a mad man for devoting his life to a game character. But, it seemed his whole character was around that one trait. As for character development, he gets to be a leader and captain, of course he gets stronger but it's what it is, we don't really get to see him reach level nine he just is at a time and we just have to accept it. Nothing is really interesting to me about ZZ. He's okay, not too smart, not too emotional, not too strong comparatively, not too ambitious,  just below average and even then people will at least have more personality. As for Dr. Y he was way better. At first he seemed bland but in the end he was cute and innocent and did almost everything for ZZ, but soon we found out Dr.Y loves drama shows and messing with ZZ which is a nice fresh air for most cold MLs, he did everything to gain affection with ZZ even if it was losing face he didn't care in the least, he love ZZ and doesn't care about anything else. He's still cold to others but he gets character development to seem less cold and empathic (even if it's just to please ZZ) but at least it's a start. As for other side characters, they come and go. Even the ones who stayed had little personality traits and more of how where they were useful traits especially the ones we mostly see which is in ZZ team. I personally liked Dr. Y three minions better but they appear rarely and with limited lines. Most side characters are forgettable; they didn't even appear in the end so I guess they don't matter or whatever. MVP was definitely Meng Kali, and I loved them and how they are usually distant and cold, they came up to his fellow comrade to ask to pet a cat and how they partake in saving ZZ even if it was against Boss, haha favorite character by far.    Overall, would I reread it? No. Would I recommend it? Also no. Does this make it a bad book? Absolutely not. There is no bad or good book out there, you could like this book if you want. This book has its faults and charm, like any other book out there. This is just my opinion on my expectations and standards for novels. This book contains a lot of fluff and cute moments between Dr. Y and ZZ, there is no smut and little gore. This is really just a cute book to shove you with dog food. Yes, some parts are particularly funny, and they solve their problems in the end. But again, it's boring, if you like fluff this book is for you. The apocalypse theme seems miss labeled in here and it's more of a game based theme, where the player (ZZ) has items and abilities, strategies and outside knowledge. Hardly any action but there is some nonetheless. This is by no means a masterpiece but it has its charm.