Advance of Z: Flag of Titans 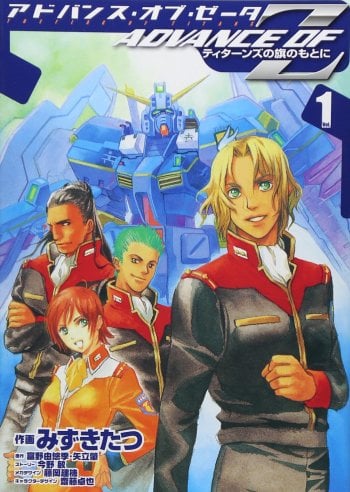 If you're looking for manga similar to Advance of Z: Flag of Titans, you might like these titles.

The Cosmic Era. Coordinators, born through genetic modification and Naturals, who are born naturally. Both experienced two great wars. People devoted themselves to fighting for things they believed in and things they should protect. Fighting gives birth to hatred and hatred in turn gives birth to sorrow. The battlefield swallows the fate of the soldiers and turned into the gravestone to an invisible future. Although a transient piece arrived in the end, the scars of war run deep. Yet in such a world, there were those who walked a path they strongly believed. Engineers giving their lives and roles to that which was discarded and destroyed: Junkers. Those who fight for those without power: Mercenaries. Those who convey the truth to the people: Journalists. Even if they deviate from the noble path, they will follow a path they believe in according to their own beliefs -Astray.

After years of bloody war between Earth and its orbital colonies, a delicate peace has been reached in the Solar System. But when the automated weapons factory, Vulkanis, is found drifting through the asteroid belt, it's a race to find out who will shift the balance of power. Will it be Captain Broden, idealistic commander of the last remaining OZ fleet, or Victor Gaintz, charismatic leader of the watchdog group, the "Perfect Peace People"? Only Heero Yuy and the other Gundam pilots stand between Vulkanis and another interplanetary war.

Universal Century 0079.03.18 – The Principality of Zeon carries out their third drop operation. The 4th Terrestrial Mobile division make their way down to Earth. Chief Petty Officer Cuaran arrives on Earth as a part of the 908th Mobile Reconnaissance Company 2nd Team’s Commander. He would later be the man who attempted to destroy the Federation’s “white mobile suit”, the dreaded “Gundam.”

The One Year War between the Earth Federation and the Principality of Zeon has begun--and the newest Mobile Suits are tested for battle! Captain Matt Healy leads his team into dangerous territory as the leader of a Special Forces Experimental Unit. Ken Bederstadt is a Foreign Legion Lieutenant working in alliance with Zeon. These two heroes are trying to keep everyone alive... for tomorrow!