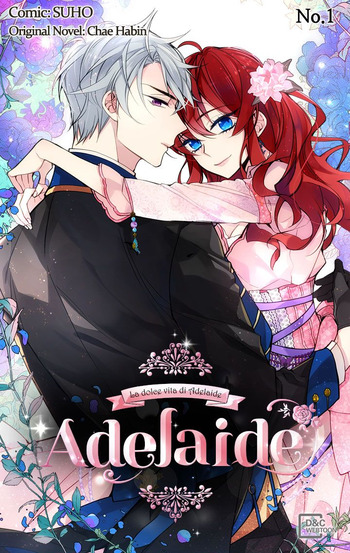 Highly recommended if you're insterested in this kind of Royal and Ancient kingdom anime & novel.

This story needs more attention than it is. Sure the storyline and the background seems somewhat awfully familiar and kind of predictable: Two main protagonists, a powerful Duke, handsome rich talented man, the perfect bachelor,... and a Lady of some noble family ended up together in the end. Elements are not quite different in this type of story, but trust me, there're more to meet the eyes. If you like 'The Abandonned Empress', 'Doctor Elise' or 'The Reason Why Raeliana Ended up at the Duke's Mansion', you will probably like 'Adelaide' too.

'Adelaide' is about a normal daughter of the countryside Duke, living peacefully in her small town, no desires for aiming something higher. She's indeed a young designer coming from modern Korean, died in a car crash and got reincarnated again in a strange world. At her 17th, she decided to attend the Débutance ball held at the capital city because she heard about somebody may be a time-dimension traveler like her has appeared. Out of pure curiousity she hoped to meet someone that shares her circumstances, but it turned out that this woman had no good intentions, she was scheming something dark and aiming for the Duchess seat... Adelaide and the Duke - Felix Elias met at the party, among with the Crown Prince, two of them eded up asking her a favor: to pretend to be Felix's financée and help them dealing with that trouble woman. Soon they formed an alliance and started their plan, but is it really just a fake play, no love?

The characters personality are well-described, suitable amount of protagonists, each has their own way unique of charm and aura, you can easily recongnize them in the story not just base on the appearances, even the sidekicks are interesting instead of making them as a sacrisfation to brighten the main's role. Adelaide is a strong, smart indipendent girl who can manage her own things, both in works as well as in love. She don't need a hero to save the day, she's the hero of her very own. On the other hand Felix seems to be a timid, quite, calm man with proper behavior, but he's really cute when he was teased due to his pure mind. Despite some problems with woman in the past, he find himself developing actual feelings towards Adele although knowing it's all an act, hers the same. A love quitely blooms by the time they're together.

I absolutely love this story, by far it's one of the best in the gerne that I've ever read.

Adelaide used to be one of my favorites but the recent chapters had me contemplating.

Don't know where the author wanted the story to go at first and till this day I still don't. The thing about their engagement was dragged too long that you will start to lose favor of Adel.

It's amazing, love the colors

Wow! I absolutely LOVED this manhwa!

I'll admit some of the bad reviews made me hesitant to read this, but boy am I glad I did! Let me begin on why I loved it so much.

STORY: The storyline was engaging and interesting. I'm not a fan of long, drawn-out drama, so it was very refreshing to see the plot move forward and problems resolved in a rapid manner. I liked that the characters were proactive and set up plans to defeat the villains instead of just sitting around helplessly and then going through unnecessary troubles.

CHARACTERS: Adelaide, the female-lead, has got to be one of my favourite characters of all time! She was bold, witty, and smart, without being stuck-up or annoying. I really liked that she took control of her situations and acted intelligently. Strong female-leads have a tendency to be brazen or hard-headed, but Adele was resourceful and made wise choices. However, her strong character didn't make the male-lead weak! Sure, he was a bit of a calm and serious character, but their chemistry was really strong, and they had a healthy relationship where both were respected. Not to mention, he was super hot! The secondary characters were also really good! It's so annoying when every female in a manhwa is a jealous competitor (for the ML), but I loved that Adele established quality friendships.

Overall, a great manhwa without unnecesary angst and drama. The ending was sweet and satisfying, and I can honestly say I enjoyed every single minute of reading this! If you like lots of political intrigue and a super-complicated plotline, this probably isn't for you, but if you want a fluffy rom-com type romance with a strong FL and satisfying resolutions, this is for you!

The characters (especially the fl) were actually able to make rapid and thoughtful decisions, but I felt the storyline was too dragged out for me to actually enjoy the plot. Furthermore, the interactions with the villain felt rather repetitive, and the engagement at the end went on for far too long without any actual storyline, making the end rather boring.

At the start, the characters were rather enjoyable - no faffing around that is often present in other manga, but as the story progressed their development seemed to grow weaker rather than stronger. The fl is smart (nice!), but doesn't act like she's reincarnated. The prince doesn't act like he has any real power (as opposed to princes in other stories) and doesn't garner much respect from the characters, and the villain is very cunning at the start, but appears to lose that cunningness as the story progresses.

Overall, would recommend reading the story on a lazy afternoon, but don't expect any gripping action to draw you in.

Sometimes I too get worn out by the facades the nobles around me put on, so I can understand why Felix finds Adelaide charming. Fe's straightforward, pleasant, and intelligent. Felix refers to fem as "plucky" and I suppose that's accurate. Feir personality is what makes this manhwa worth reading. The plot involves Adele (as fe's casually referred to) becoming Duke Felix's fiance as a way to try to get the social leech Susan out of Felix's life, with the initial understanding that the engagement would eventually be called off. As you would expect from this type of story, the fake romance turns into a real romance. But unlike what seems to be the standard way of handling this type of plot, Adele doesn't pussyfoot around or hide feir budding feelings (though Felix does struggle to recognize feir own feelings for fem). Regarding Susan, Adele primarily strategizes together with Felix and Nicholas, the crown prince, and shows femself to be adept at outwitting Susan's machinations and navigating the judgment of public opinion. Adele predicts feir opponents' moves, turns some of Susan's allies against fem, and plays a role in thwarting the conspiracy against the royal family (which is related to the conspiracy against fem).