Accomplishments of the Duke’s Daughter - Reviews 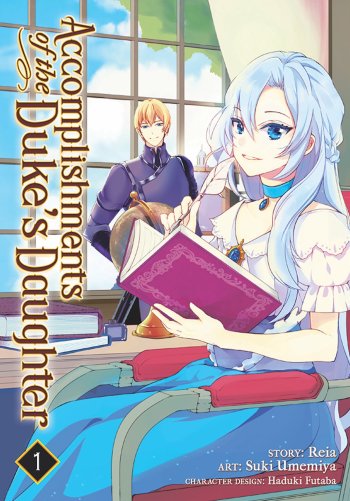 Truth is that, I actually hate shoujo genere manga/Manhua (hate Female mc)  but I love "Person in strange world' or "another world " type manga.Though Half-heartedly I read this one but Surprisingly Much better than I expected ,The beauty of this iskeai plot is Amazing,I actually quite Enjoyed this One.Story is About Mc was transpoted inside a game she played ,character she possed has a bad ending, lost her fiance (he begin love another girl ) and doomed to fail in orginal game storyline,here mc managed to change that moreover she make changes and implemented techinques from her orginal world  like Banking ,public education system,Chocolate production etc.Her company become one of greatest and story goes on..... with twist's .

This is clearly a manga with a thought-out plot. Personally, this doesn't seem like a shoujo manga focused on romance. It deals with matters with a mature perspective, more befitting of a josei/seinen genre. The manga has a well-written complex plot.

The story focuses more on the overall kingdom, especially Iris. However, it does have a love interest (and an interesting one at that), and their relationship is one that develops properly and naturally, based on trust and respect.

I'll admit that the first few chapters didn't smoothly introduce the supporting characters, so in the beginning it felt like the manga was dumping information from the light novel onto the readers. After some chapters, I got used to the characters' personalities, and that's when the plot truly blooms.

This manga is a good example of showing and not just telling. The manga shows the details of Iris' (the female protagonist) work and thoughts. The only complaint I have about the chapters is that they sometimes go into too much depth about taxes, banking, etc., which may bore readers. Some pages are just filled with textbook information. Luckily, the word vomit only appears in the beginning chapters about Iris' fief's reform.

Though economics information do re-appear in chapters after that, they are just enough that they enhance the storyline and show you the importance of what Iris has to do.

It is rare to read an isekai where the antagonists aren't written as stupid, so the conflict in the manga is wonderful to read.

At first glance, the conflict is the typical lover's spat, but there is so much more behind that, including the (very well written) fight for the throne, faction divisions, and tension in not just the kingdom, but also between nations. Watching Iris, her family, her employees/supporters, the royal family, and opposing factions was certainly entertaining, and kept me on the edge of my seat. The resolutions are logical and satisfying.

Iris' love interest is also written splendidly. It's rare to see a love interest that supports and stands beside the main character so well. (Hint: while in the beginning there was a frame that made me believe that her love interest was a knight, her love interest shows up much later. That's all I can say without spoiling, while still keeping your hopes up that Iris will be with someone of her caliber.)

The art is beautiful and I have no complaints. I especially like the characters' eyes and hair.

Though we don't see much of Iris' connection with her past life other than her being capable of filing taxes, I think it's not necessary that the story delves too much into Iris' past life. Personally, I think this could have been a solid story on its own without the isekai plot, but that doesn't matter.

This is truly a gem. I recommend you read this if you want a manga that has depth and proper development in characters and their relationships.

I just love this manga so much! Gone are the mangas were the MC is an idiot and questionable. I love how she stands on her own and knows the consequences. She's actually using her knowledge from Earth.. and also since the two souls are merge you can see that some of her actions are justified, not some other mangas were you question their personality. Slow update, but this is that kind of manga were you just go back to Chapter 1 and start over again when an update isn't available.

ew. i dont like it it gets one star for the average art. im not interested i couldnt get past the 5th chapter.

some may say my opinions are harsh especially those giving it 4/5 stars, but when ive read other manga with the same type of plot but executed way better i cant help it.

i just want to tell all those out there , if your interested in a strong female lead in another world,

then accomplishments of the dukes daughter is just the right story for you , the art is wonderful the plot is spectacular it’s just wonderful, it makes me speechless.