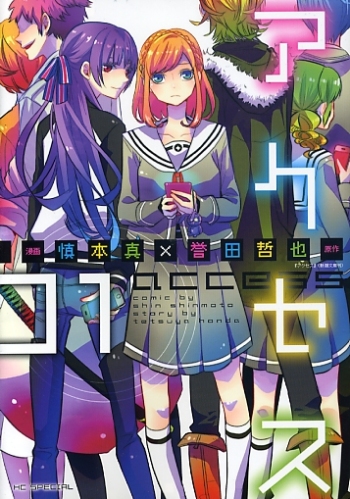 A Chibi manga of Kugiko-san.

Mayumi is a girl who lost her parents in a car accident; unable to deal with the overwhelming sadness, hatred and anger, she wishes only to be able to stop feeling altogether.Five years later, the now 18-year-old Mayumi's sister is the first victim in a series of bizarre incidents that involve people receiving text messages indicating a certain body part, immediately after which said body part is removed - painlessly and without blood loss - from their body and disappears completely.

Kokoro lives in a place called Gray Town, where all the buildings are gray. That is, except for one single house built who knows when - the Red House.

Rinko is an ordinary girl who was born with a mysterious birthmark on her left arm. But when that mark starts to get darker, strange accidents begin to happen everywhere around her, involving even the people she cares about. What will the powerful magic awakening inside Rinko bring her?

Kamishina Fuuto would like to think he's a normal boy, but he is the reincarnation of the High Priest of Darashaal, a tiny Asian country that has just celebrated the inauguration of...its new high priest. Clearly, only one of them is the true priest, and unfortunately for Fuuto, it is he. As the celestial guardians come to dispose of him they discover that he is not, as their leader Naga says, a fake. Fuuto just wants to be normal and live a normal life, but he is constantly drawn into trouble as he has an extremely keen spiritual sense and the ability to soothe ghosts.

A temptation from which you can't escape... What's a dress between to friends? Maybe a whole lot more than nothing!

Shuugo Hayami is a doctor at a nursing hospital, which was once a psychiatric hospital. One evening, when he was on night duty, a man in a clown mask breaks into the hospital, and he is not alone. He is with Hitomi Kawasaki, a university student who has been shot by the masked man. The masked man tells Shuugo to treat Hitomi, and also takes the 64 people in the hospital hostage. Soon, Shuugo and Hitomi try to escape from the hospital, and they encounter mysterious cases one at a time.