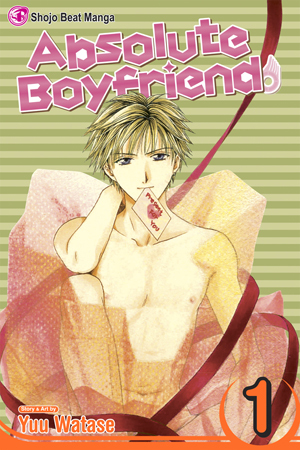 Story: When first hearing of this I thought ''God, this sounds a bit weird O_O'' But since Yuu Watase had never let me down before I thought I'd try it and see. And I sure wasn't dissapointed. Humourous, lighthearted and sweet, Absolute Boyfriend is typical Shoujo fluffiness but with some added sparkle. The story grabbed me, the jokes made me laugh, I loved the characters and the only part I didn't like was the ending- tears were almost flooding out when I'd finished reading it, it was so bittersweet. Don't get me wrong- the ending WAS good, I just felt very sorry for one boy in particular, since he knew it would end the way it did and managed to tough it out till the end. The story really couldn't be flawed.

Art: Though I found it a little simplified in comparison with Yuu Watase's previous works, I found myself liking the art style- it suited the story well and the chibi's were adooorable :3

Characters: The characters are so relatable in Absolute Boyfriend, you end up loving each and every one of them- from clueless Night to clumsy Riiko and problematic Gaku. The ability to easily fall in love with the characters is part of its ability to draw you in and thats also part of what makes the ending so tear-jerking, you end up considering the characters as completely real people and feel genuinely sorry for some as well as happy for others.

Overall: Getting over how weird it may seem at first glance, Absolute Boyfriend is way more than a book about a girl who buys a figurine online due to her pent up sexual frustration at her lack of boyfriends; this manga's probably one of the best I've read and stands out for its great storyline and amazing characters.

So... I laughed, I cried, I read until stupid o'clock on a work night. Thumbs up for this manga.

It's not for everyone, but I definately enjoyed this manga very much. Absolute Boyfriend was funny, sweet, sexy and sad. Despite the absurdity his origins, it's impossible not to get sucked into the roller coaster journey of Night as he searches for a way to become more human and win over the girl he loves. And even though Night definately won me over, I found myself cheering for both of the male leads without any clear preference. This made the story all the more interesting in that I couldn't predict a satisfactory ending, which of course made me want to know how it ended IMMEDIATELY (hence the stupid o'clock incident). Overall, I was satisfied with the storyline from start to finish.

However, in regards to the characters, I was a bit disappointed in the female lead. Given the calibre of the males used, I would have preferred someone a bit more admirable. But that's just my opinion.

I would definately recommend Absolute Boyfriend to anyone who enjoys a good romantic comedy.

I am a romantic kind of person but I am not a huge girly girl.  I knew what to semi expect from this manga since it involved romance and most romances that I have read involve a girl who is very shy and reacts out of proportion and the boy always seems to want to protect the girl from any evil possible.  I find that this manga has character that deviates from that.  This manga has made me laugh and smile and if you want a good laugh and smile, read it.  :3

Premise: Riiko never catches a break; every boy that’s she’s ever loved has turned her down without hesitation. Hurt and alone, Riiko turns to a strange online company for a solution. Will her artificial boyfriend Night solve Riiko’s problems or make them worse?

Art: Sleek, smooth art typical of shoujo manga. Everyone has spiky hair and is drawn with long, elegant lines. I approve.

Relationships: Absolute Boyfriend has good tension between the characters and maintains it well through series. Riiko is easy to relate to, and Night and Soshi were both appealing. Personally, I shipped Soshi from volume 2 on.

Action: The battles in this series are used more for humor than tension. In particular, 02’s fight with several enemies. (You’ll know it when you see it.)

Extras: Of the two final stories, I preferred “Aromatic.” It seemed kind of hollow at first, but once the secret of the girl’s pheromones was revealed, I was charmed.

Overall: Absolute Boyfriend is a solid series. Some parts are a bit more mature, but it’s handled in an innocent way. Expect a sweet, light drama.

The story is solid enough, with the teenage protagonist enacting the typical teenage girl with burgeoning hormones and about as little clue as to what to do with them as they have about the consequences of their actions upon others. Lucky that the 15-year-old, astoundingly virginal Riiko accidentally orders a doll to practice her feelings on and to bumble around the cluttered wasteland that is 'emotional firsts'... However, when she discovers that her new toy is designed for something far beyond her expectations, Riiko goes about her life as best she can, with the ever-present true nature of her new devoted companion... Who is a glorified, sentient sex doll she calls Night, masquerading as a fellow student to keep his identity and purpose from becoming common knowledge. Basically, he proceeds to constantly attempt to initiate intercourse with Riiko, and eventually learns a lot about her from the resulting actions/dialogue - with the help of a smattering some school-based happenings, laced with the constant theme of sex.

This sex thing constantly hangs over her like an impending obligation. This part of the story - one of the main driving forces of the plot line - is basically treating the eventuality/inevitability of sexual intercourse in a relationship as an assertion, especially with someone so young and emotionally naive. Sex shouldn't be a 'when?' unless it is an independently-driven decision. It wasn't a dealbreaker in my enjoyment of the series, per se, but that mild disgruntledness about that point was amplified into a bit of a quiet 'gah, seriously?' with the level of reliance the story has upon this 'inevitability'.

Riiko is a nice enough girl, but can be difficult to like and sympathise with sometimes, especially when it comes to Soushi and her incredible ignorance of his feelings through the story. This is especially apparent toward the end when all the cards are on the table and there's no escaping the facts. Granted, Riiko does seem to gain some emotional maturity as things happen and time goes on, however she always retains that hint of profound naivety... which can be seen as cute, but it kinda just annoyed me in the end, especially with all of the incredibly poignant themes being crammed into the undersized and underdeveloped heart and mind of a teenage girl. Without any spoiler details, I can say that the emotional side of things gets a little cramped, which is not helped in the least by the seemingly 'glossed over' resolution that is 'reached' with Soushi in the wake of the trials she puts both he and Night through continually within the story.

However, I do understand that with a mere 6 volumes, it would be difficult to wade too far into relationship complexities, the pore-fine points of each personality, and even too far into time etc. and so the development of Riiko as my main, yet minor, bugbear might be cut a sliver of slack.

The ending was a certainly a twist, and one which contributes heavily to Riiko's eventual step into the path of beginning to gain emotional maturity I was dearly hoping she'd discover. But, in my opinion, in the end, she still lacked that sharper, more inuitive empathetic quality that would come with the genuine realisation or revelation of one's own actions and how one deals with highly-emotive, unexpected events.

The artwork was decent throughout the series, with consistent, sometimes refreshingly zany, characterisation and adequately detailed settings and miscellaneous expressions.

I always tend to overlap my story and character analysis if the main character impresses me enough in either direction. I reckon I've ranted enough about Riiko, so I'll move onto the secondary characters for a moment.

Night fills his role as the spellbindingly attractive, kind, loving, sometimes-clueless sex android very well, and his journey through this story is very well imparted, which of course, strengthens the power of the developments throughout the story. Given that he is the main representation of the 'obligatory' nature of the sexual context I explored earlier, it's interesting that he isn't the focus of my ire on this matter - which falls mostly to Riiko and her lack of social and emotional intelligence at some stages.

Soushi is an interesting one... he's the tall, dark, understatedly handsome, quiet type who would be loyal to the end - and is, but is also brutally honest at times. This quality gave me more than one half-smile of understanding throughout the series with the appearance of unabashed, almost coldly logical advice and rebukes aimed at Riiko when she does something to warrant it.

One look at the title and tag, and you'd think you've pretty much got it down already, right? Well, pleasantly enough, Absolute Boyfriend is your run-of-the-mill-shoujo in essence and basic themes, but this story contains fresher-than-average twists and some good imagination in character quirks and consequences, so don't get too put off by my dissection of some parts, as there are many redeeming features to this title, depending upon personal taste. It is rescued by the refreshing, lightly enthralling story and the characters who surround the main character and carry her along just fast enough to keep her from losing too much credibility as the likeable lead.