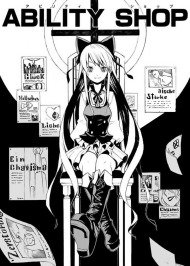 Toshiki is a below average student and often the target of ridicule. After he accidentally runs into a shop sign and breaks it, he enters the shop and finds out it will sell him abilities.. But these abilities don't come cheap.

Is this my first one-shot manga review? Booyah! Story: Toshiki-kun is "inept," and cannot seem to do anything school-related particularly well. He's a little upset about it, but then he finds the "Ability Shop" (think Yuko-san's shop in "XxXHolic") and is able to be granted any ability. However, he loses some of his life span every time. Soon after, he's no longer viewed as worthless by his classmates, and he is happy. No spoilers (despite the fact that this is only a chapter long), but I will say that the ending is one of those "Let's eff up our moral and make this happy" endings. The manga was actually pretty philosophical and seemed like it would have a moral, but the ending was a disappointment. Just saying. Art: It is, for the most part, completely average. Is it crazy? No. Is it kawaii? No. Is it CLAMP? No. It's just so normal. This isn't a bad thing, per say. However, it makes for a lackluster read. Character designs are stock, but the shop owner has a nice "neko" feel to her. Backgrounds are nondescript. Characters: Please note that this is a ONE-SHOT. One cannot expect development. And, unfortunately, every character in this particular one-shot is pretty much some archetype. I can find no picture, obviously. Toshiki-kun: He's an average kid until he starts using his newfound power, and quickly goes a little nuts. (If "Code Geass" is "Death Note" lite, then this is "Code Geass" lite.) He's a bit of an annoyance by the end, and is a stock character, for the most part. Shop Owner: Neko girl, runs the shop, teaches lessons, explains morals, is really effing kind, let's move on. Kumi: Toshiki has a crush on her, but she ends up getting a boyfriend. (The bitch!) She assisted in the creation of the great original ending. But this plays second fiddle to the fact that she REALLY LOOKS LIKE MAKA FROM "SOUL EATER!" Kumi's boyfriend: Sure, he's a minor character, but I'll include him anyway. ... ... ... Well, crap. He doesn't do anything. Overall: A damn good concept (cliche, though), ruined by the mangaka's lack of courage.

This is one of those morality tale type of manga, ya know? Where there's an ending with poetic justice and the main character learns a life lesson--in this case, the value of earning achievements rather than having them given to you. I didn't really care for the "personal insolvency" plot twist at the end; I felt like it ruined the momentum the story was on. The art isn't very good.

I don't know why I enjoyed this so much in the past. Maybe because I was an idiot like the protagonist and couldn't find my own talents, hoping to be better by magic. Now thankfully I've overgrown that phase, and today I'd never approach this story. Also the ending is too convenient. The characters are not really memorable. And I still ask myself how people like the Shopkeeper register their own activities. I know the magic shop is a trope, but damn it's really abused.