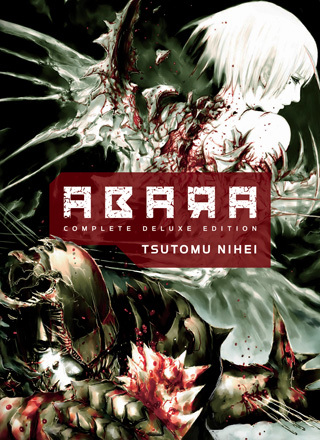 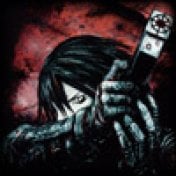 Stylish and hard, ABAЯA is one of the best sci-fi mangas. With the Nihei's surrealistic atmosphere, a harsh art style and a wonderful sci-fi story this manga is the nice choice for those who looking for some original manga.

Again this is another shorty. Only 11 chapters and it stops way too abruptly.

Well here we go again, a nice premise, a good art style, and then it all falls apart and ends. Like Digimortal and armored badass gets to fuck-up these crazy white-armored monsters that people turn into. Why???, What is this placenta that some of the white and black ghenana have? What was the previous mausoleum destruction of a previously ghenana war? None of this is answered or even close to being answered. You have some badass cop who can chop a thug's arm off barehanded how? Who knows this series is full of questions and no answers and the Authors style of no dialogue, is number 2 of the no-read confusion story. Maybe an hour's worth of reading not even.

The art is amazing and it's a very quick read, but the characters are paper-thin and the story is confusing.  The batter may taste good, but this cake is half-baked.

We are thrown into a world far into the future--when plant-life is nowhere to be seen and humanity is on the brink of extinction. A sprawling city lies beneath the constant fog with a few mausoleums thrusting their flan-shaped chests into the sky. Winding staircases and walking platforms hug the walls of the buildings overlooking precipitous dropoffs. Cluttered and with excessive pipeage and metal plating, the entire city feels more thrown together than planned, industrialization taken to an unhealthy extreme. Even the phones have excessive ridges and bumps. One is more likely to see empty corridors and streets than ones filled with any pedestrians. And certainly no cars.

And in this dreary and dead world, sometimes people spontaneously combust into gaunas--skeletal monstrosities, spindly and nobulous. And though the manga maintains a sense of mystery and disorientation throughout, the primary trajectory of the manga is clearly attempting to stop these white gaunas from growing stronger by killing them with the help of the artificially-created black gaunas. There are two black gaunas--Kudou (who had run away from the Observation Bureau) and Nayuta. The Observation Bureau works under the skeletal remnants of the Fourth Aeon Guild and are being led by the morally questionable Longface (as I've lovingly nicknamed fem). Tadohomi is a member of the Observation Bureau. There is also the Ministry of Martial Somethingorother who don't know about the existence of gauna and their investigator Sakijima who is trying to uncover just what's going on in feir city. Pretty decent characters I guess, though they might've been better if the story wasn't trying to maintain the feeling of being dropped into the middle of something.

None of the characters show emotion very well, which for the most part fits with the drab, hopeless feel of the manga. But there are some scenes--such as when Tadohomi calls out for Nayuta in chapter ten--where it feels like a flaw on the artist's part for their facial expressions to be best described as "bored." Also, though the fights are definitely intense and destructive, it can be a bit difficult to keep track of who's who and what's going on when you have two gaunas fighting each other.

The story is told us really quickly. The lore is not really explained, but I got the feeling that what happened in this story is a cycle that is being going on on earth a lot of times. That's why the world seems to have that shape. Anyway, I like this style. The contrasts, the faces, the crude illustrations, the silence. The silence is probably the best. There are dialogues but it feels peaceful and relaxing when no one speaks. Even when someone's limb is flying away, it's quiet and graceful. The images are strong enough to not need unnecessary baloons.