A Tough Alpha Wants to Be Loved: Cornered by a Young Omega - Recommendations 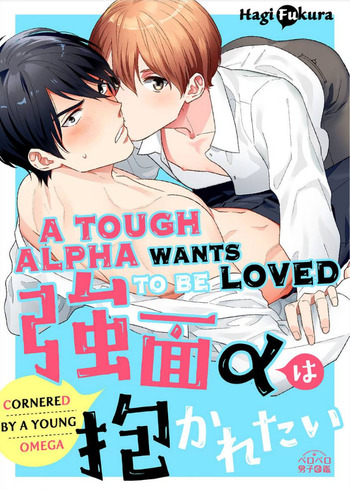 If you're looking for manga similar to A Tough Alpha Wants to Be Loved: Cornered by a Young Omega, you might like these titles.

Takes place in an A/B/O universe. A black haired bottom and a top with light brown hair.

An omega who was pretending to be a beta is suddenly the mate of a top tier alpha!? It happened one night on their way home from a company drinking party. When Mr. Hashida takes care of the drunken Mr. Hayashi, just a small amount of Mr. Hashida's omega pheromones is enough to drive Mr. Hayashi into a frenzy. Despite his resistance, Mr. Hayashi not only has his body taken, but Mr. Hayashi bites his neck indicating that they've become mates. However, it seems Mr. Hayashi remembers nothing from that night... Mr. Hashida considers himself lucky and continues to pretend to be a beta. He decides to hide that he's his mate forever, but Mr. Hayashi (an alpha) keeps desiring his body!

An omega opening a detective bureau, Idou Jitsuya, has a pair. Kitakouji Kazuhiro, Jitsuya’s alpha, is an elite detective from the Metropolitan Police Department. Together they’re business partners who made a mutual agreement to become a pair. Jitsuya uses this pair to control his omega constitution. As an “S”, Kitakouji uses Jitsuya for insider information. Even though it was meant to be a cut and dry relationship, an omega’s body needs to have sex regularly with his pair… Involuntarily, Kitakouji and his omega’s body are forced against their will. The most vexing for both of them, the sex with their pair is the best they’ve ever had. While continuing this distorted relationship, an illegal drug case aiming at omegas is at large!?

Shima has always had a hard time finding a job due to his omega status and constant failures in his interviews, but one day he manages to get into the editorial of his favorite magazine "Potato Life". There he meets Amamiya, a kind and trustworthy superior, who despite being alpha is called "pitiful" for his plump and disheveled appearance, because of this Shima decides to make Amamiya the perfect man so that everyone will notice his charms. This is how they begin their project in which they will get closer and closer.

Akino absolutely despises his co-worker Kataoka, whose arrogant face makes Akino mad anytime they cross paths. One night, after drinking, Akino comes across Kataoka kissing another man! Ecstatic he finally found one of Kataoka's weaknesses, Akino believes he can use this for blackmail against the younger man. But, things do not go as he had planned and after the situation does a 180 degree turn, Akino declares "I will definitely make you say you like me!!" What will happen to these two co-workers, the playboy who claims to love no one and the fool of a man who will do anything to show his rival he is better?

A Hole Craving to be Touched

Souta Miyano has a secret. He's weak when it comes to being played with from behind and desires something other than his finger to satisfy his needs. One night out, he gets too drunk and a coworker comes to his aid. It's then that he accidentally exposes his secret. Little did he know, their time in the bathroom stall that night would be just the beginning of more pleasures to come.

Chase Me Till We Fall in Love

Warehouse worker Makoto Ishida has been stalking his slightly clueless coworker Arata Yoshimoto, watching him from behind his geeky glasses. He'd even moved into the room right below Arata's. He lives to admire the photos he secretly takes of his sweet, sweet love... Except, one day, Arata discovers his prized photo collection!! In Makoto's fantasies, his encounters with Arata turn naughty fast, but now that the real Arata's standing in front of him, he doesn't know what to do!!!

Just Another Hard Day At Work!

Nozomu from sales is always coming to system engineer Teppei with projects that have ridiculous deadlines. No one else will do them but Teppei, and it's because he's always had a secret crush on Nozomu. One day, Teppei decides to blackmail Nozomu into getting intimate with him. What'll happen to the sweet, straight sales guy and the younger alpha male...?