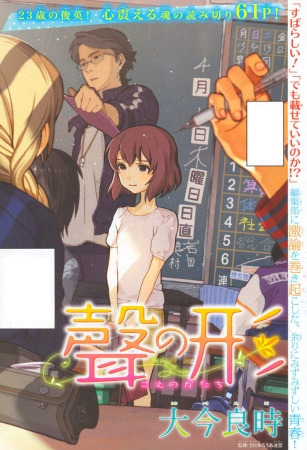 Every day after school, the quiet and introverted student Kurosawa goes into the empty girls bathroom and "relieves himself". Besides this extremely odd ritual, Kurosawa also has a thirst for justice and a judgmental attitude towards his classmates. Upon seeing the bullying of an awkward girl in his class by two of the "popular" girls, he decides to bring justice to the bullies the only way he knows how. His plan for revenge goes "just as planned" until met by an unsuspected accomplice.

Kids and teenagers can both be really cruel, and for the odd one out, life can become hell. Bullying, ill rumors, rejection. The fear of those unknown to us and the fear to get to know that they, too, are fragile people just like you and me who suffer when we hurt them. But, for better or worse, the positions of bully, bullied and observer switch places at the whim of the majority's circumstances, and that is when people learn the most about others and themselves.

In the end, Koe no Katachi and Onani Master Kurosawa are somewhat different takes on the same idea of fellow humans getting to comprehend and respect each other. Beautiful tales of sorrow and suffering, self-realization and redemption, then an effort to reach out to happiness... and perhaps love.

Komi-san is the beautiful and admirable girl that no-one can take their eyes off her. Almost the whole school sees her as the cold beauty out of their league, but Tadano Shigeo knows the truth: she's just really bad at communicating with others. Komi-san, who wishes to fix this bad habit of hers, tries to improve it with the help of Tadano-kun.

Wisdom brings good fortune; but wisdom that is too advanced to humans bring destruction. Ox and Ivan, a pair of "wisemen", are on a journey to collect wisdoms that are in the wrong hands.

The pilot chapter for the Kagijin manga.