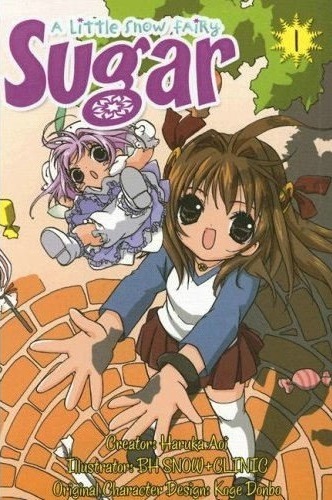 "Sugar" revolves around an eleven year old girl in modern Germany living with her grandmother and whose mother has deceased three years ago. She is a gifted pianists and dreams of raising enough money to buy back her mother's piano that was sold to a local music store. That is until she meets a little snow fairy sugar, a season fairy only she can see.

Art: The art is the first redeeming quality of this manga and since the manga is aimed at young children, the art goes along perfectly with the genre. The characters are cute without being too bubbly and the backgrounds are rich and really give off a strong European feel. One minor complaint is that the artist had a rather interesting way of portraying angry that usually ended up being quite hilarious in the facial expressions. But the problem isn't so terrible that it takes away from the whole story.

Characters: In one word: wonderful. Especially Saga, who I find would be very inspiring for young girls. She has a job, is a wonderful piano player, but is of course with her flaws that she needs to plan everything throughout the day. Sugar, on the other hand, may not be as talented but never fails to give up. The list could go on. Each one of these characters are inspiring, well thought out, and break away from the typical manga female heroines who only seem to focus on love. I really enjoyed these characters.

Story: As mentioned above, "A Little Snow Fairy Sugar" revolves around Saga and the Season Fairy only see can see. Many older people may turn their noses at such a childish sounding manga but the story is good enough to be given to a child as an introduction to manga that they may even still treasure later. This is the only manga I have read that seems like it could become a fairy tale of it's own, and a story a little girl would really be interested in reading about. For older people however, the story is redeeming for it's innocence. Those who are looking for a cozy manga without violence as a plot I could not think of anything better to recommend.

Overall get this if you see it if you are into the genre. Don't expect to have your mind blown but instead get a big heaping spoonful of innocence topped with some child hood nostalgia.