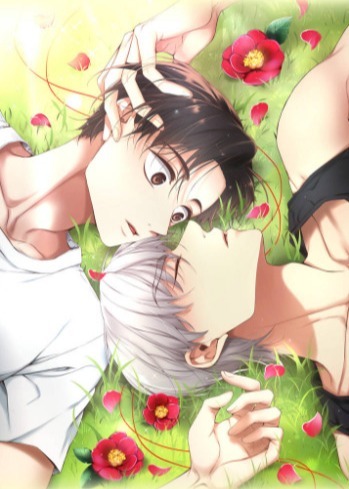 A gay guy is after me.

I heard that he's gay.

While the art isn't bad for this webcomic and it has been interesting enough for me to consume 64 chapters in one day, I have to say A Guy Like You has two major flaws. Firstly, the primary and secondary characters for this series are seriously annoying. All four of them. We've got Kang Jinha, a moody fellow who is hurt that his childhood friend, Siwon Go, doesn't remember him. So he decides to lash out and hurt Siwon right back. Because that's a sure-fire way to win someone's heart, right? Instead of, you know, EXPLAINING WHAT THE HELL IS GOING ON. And even when they move past that, he continues to hold back important information, putting the man he loves in danger because he doesn't warn him that their new classmate is his ex, an obsessive psycho who is stalking him. Eventually, Jinha gets pissy and breaks up with Siwon, leaving him vulnerable to being drugged and kidnapped by the sadistic lunatic. And let's talk about Siwon Go, another highly annoying character. He's a living-in-denial uke who blushes profusely but is stuck in the closet refusing to acknowledge his feelings because *gasp* that might make him gay... and people might find out! Even when he finally starts to accept his feelings, Siwon still refuses to give his relationship with Jinha the validation it deserves, hiding it from others because apparently society's opinion of his life is more important than him - or the person he loves - being happy. I get that he's afraid, especially of being in a relationship when he knows he's not yet ready to take it to a physical level, but the longer this goes on the more annoying it gets. Next, we have Donghyun Jang, the best friend who secretly loves him but pretends to hate homosexuals so no one catches on to his feelings. (Because that's not obnoxious at all, right?) Eventually, he cuts the shit out, which I was very thankful for. And lastly, we have antagonist Lu Xuan Run, the king of obnoxious assholes who thinks treating people like garbage is the perfect way to win their love. WTF man. This is a grown-ass adult who did the EXACT SAME shit as a child but apparently has learned absolutely nothing in all this time. Sadist psychos are not my thing, I just want this guy to die as quickly and brutally as possible. All these people are university-attending adults, but every one of them has made me feel at some point in the story like they need their asses beat for being this stupid. The first three characters have good traits as well, but the fourth guy seriously just needs to be dragged out into the street and shot. My other complaint with this comic is the pacing. It's sooooooooo sloooooooow. Storylines drag on forever and don't look for too many hot yaoi scenes to spice it up. Every time it looks like the MCs are about to have sex, they don't. If you came here looking for somebody to get it in, this story is a rollercoaster of disappointment. Something always stops the action from taking place, and after sixty-five chapters I've learned that sex dreams, hotel rooms, condom purchases, and make-out scenes are all just red herrings leading you to think the story is about to get racier than it actually is. Sorry to disappoint you, but that's how it goes. We do get some nauseating scenes of abuse, where an unwilling victim is kidnapped and assaulted, weeping miserably as he is forced to participate in a psycho's BDSM fantasies, so there's that for people who are into that sort of thing. Personally, I just find it disgusting. I'm hoping this manhwa gets better, but right now I'm not rating it very highly. The best thing it has going for it is the pretty art.

So, basically, this is still a work in progress as of right now. That being said, I can only really comment on what I have read so far (about 44 chapters).  The story is actually very solid, in my opinion, as the relationship between the two characters (and the secondary characters) slowly develops. The supernatual touch is also interesting, and I will admit this is a story that had me hooked after only a few chapters. There were times when I thought the story was going to fizzle out, or close to ending. So far, the plot is going strong, and staying interesting as more characters are introduced. I am excited to see how it all ends when it does. I really don't want to write much for fear of spoilers, but the very basic plot is that two guys can meet in their dreams, and they slowly figure out how they know each other.  The art is downright beautiful, but if you're like me and you get weirded out by odd proportions, it might take you a while to get over one thing. Kang Jinah's hands are just... odd. My friend calls them mutant hands, and it's even addressed in a early chapter, which made me giggle. I seems to have been an intentional move by the artist for whatever reason, and I'm mostly over it now. But it was super distracting for the first few chapters. There were a few other odd body parts, mostly in earlier chapters, but I think perhaps the artist is either refining their style or I have simply stopped noticing because the story is so good. The characters are well thought out, with even the secondary characters having depth. The characters are very real, with well developed personalities. Some of them have downright tragic backstories, and the artist likes to play with the reader's mind a bit. There are certain details of their personalities and backgrounds that I feel are intentionally misleading, only for "the twist" to be revealed chapters later. Just when I think I can predict what the characters will do, and what's happening, it changes.  Overall, I really enjoy the story so far, and I am hopelessly addicted.

OK. I dont write so well in English, so I'll be direct. The story is tiring and exhausting, they are always the same problems that they can not solve and that could be solved simply with a quick talk, it seems that the main characters cant approach right until the end and that whenever they get close some how something happens and they come back basically to the beginning, it seems that the story doent walk what is at least frustrating. Also the end seemed forced and many parts made me very uncomfortable mainly because I had not seen that would have this abuse parts. I read everything because I always thought it was going to improve and get better, well, it didnt, it came to a point that I just wanted to finish so I did not waste so much time without even knowing the end. The only part I really liked was the drawing style and the hot look of the characters. And yes that was the most direct I could get for the comment.