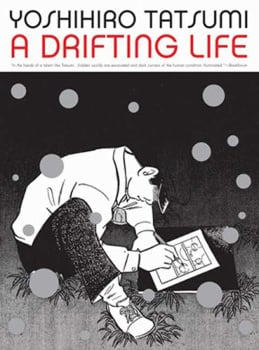 In the mid 20th century, young Hiroshi found himself enamored with manga – especially works created by Osamu Tezuka. With a strong desire to publish his own works, Hiroshi picked up a pen and began a lifelong journey to live up to his role model. Through disappointments and triumphs, Hiroshi continued on to help birth a new form of manga, as the history of the medium unfolded around him…

A Drifting Life is a specialty manga for fans familiar with Yoshihiro Tatsumi's work. This is not a history of Gekiga, but an autobiography of Tatsumi from childhood to his later twenties.  Life may sound like the story of the creation of Gekiga, a reaction against the popular style of manga as stylized by Osamu Tezuka, but Life closely focuses on the life of a manga obsessed man, Tatsumi. His life is shown as a parallel with post WWII Japan. Originally attracted to manga through the work of Tezuka and other popular mangakas, Tatsumi grows up to become a mangaka and learns about the challenges of creating manga. Harsh deadlines, unreliable publishers and restrictive formats leave Tatsumi in a dangerous position and leave him unfulfilled creatively. Tatsumi tries to experiment within these boundaries and push the limits of manga. I am not a fan of Tatsumi after reading two volumes of his work, The Push Man and Abandon the Old in Tokyo. I feel like his short stories have fascinating ideas, but his obsessions with sex, violence and often both make his stories more exploitive than genuinely progressive. Tatsumi's greatest strength is creating a bleak mood of despair and powerlessness in mundane settings. I do think that Tatsumi helped to create a new aesthetic within manga that has allowed for better writers and mangaka to explore, counting him with more famous mangaka like Kazuo Koike and Shigeru Mizuki.  The strength of Life is generating a mood of genuine excitement in manga. Tatsumi as a writer clearly cares about manga and how manga can be used as ana artistic platform. I have learned more about the personal troubles of a mangaka in the eight hundred and fifty pages than in any book or anime that I have seen. Memorability is Tatsumi's best quality, because his manga bear a painfully distinctive and bleak view on life. Life has many weaknesses and these are derived from the lack of focus that I have seen in Tatsumi's other works. Most of the characters are shallow, with a few characters focused on to the exclusion of the rest of the cast. Some of the imagery can be striking and the black and white colors are important to the mood, but much of the art is unimpressive or primitive. The plot is compelling, but many scenes flow into each other without generating excitement. Life bears the limitations of a short story writer creating a very long story, with an episodic feel to their story.  A Drifting Life is a strange manga written by a strange mangaka. Before reading, search for Yoshihiro Tatsumi's other work because that will determine if you would want to read this massive manga. For those curious about manga in its early stages, Life is a fascinating and personal tale about people who love manga.

A Drifting Life has been at my library for lord knows how long. Sitting there, amongst all the short volumes of more known works and volumes numbering in the teens. Picked it up when it finally dawned on me that it was on my to-read list and immediately started on it when I got home. What ensued wasn't a fast-paced tour-de-force or a high intensity rollercoaster or anything that encompassed speed or particularly excitement. What it was was history, life, the old way and a realistic view on a budding mangaka. This was the age of Tezuka, as the A-P description states. It was an old era, where rental book stores were the rage and short story collections were in their boom. This was something different, something that I wasn't used to or saw much of in whatever manga I read that focused on the historical part of the medium. It was fresh, so it might have been a bit more enticing than a retread of something I may know more about. The lifestyle of a mangaka in this sense was intriguing and dare I say, engrossing. As intriguing as a slice-of-life/autobiographical/historical manga could be. Slice-of-life as for some chapters, it's almost like the daily life of Hiroshi without going too deep into it. It gives you just enough to see his life outside of manga. The slow-paced nature of it makes it more human and real as it tells the tale of his life in manga. The historical part comes in as interspersed throughout are a few pages devoted to pieces for that specific time. Not just manga, when magazines were issued or short story collections were published, publishers opening or closing, but also historical facts. The end of WWII and points of Japan making it's recovery, of the government and a few of their decisions and for Hiroshi, films and some of when they came out in Japan. This isn't all about Japanese culture as it gives mention to Humphrey Bogart, Audrey Hepburn, other lesser renowned actors and actresses, foreign films outside of America and Japan and even some cinematic pieces from a few. The film part is essential as it's one of the inspirations of the main character; to incorporate cinematic scenes and concepts into the manga world. From film to other manga artists and with the latter, it gives snippits to the names and faces of those Hiroshi comes into contact with and works with. The reader gets to know enough about them so that we know who they are but not enough that it detracts from the main focus of Hiroshi. Characters can walk in and out, some can stay, some can have influence and some can leave, only to resonate later on in the tale. Nothing's completely ended or comes to a conclusion in terms of charcters as that's what life is. The manga portrays that in a way that it feels real by not giving characters a complete and absolute send-off. The art style makes me think of an autobiography, of an older time and without all the nuiances of the modern age. I'm saying that as the volume I have was published in 2009 and is durastically different than what we see today. The style is more simple, more old-school and, like in the age it's in, makes me think of Tezuka. It's befitting for a biography but elsewhere, not so much. The panels aren't plagued by dialogue or narrative and that feels like a boon as it moves at a quicker pace than if it's bogged down with blocks of text and simple art. The pictures are more prominent and even in the factual portion of the manga, the pictures sometimes outweigh the narrative facts. The complete work in it's single volume format is daunting and from the offset not too exciting. It's more like a gentle breeze than a gale or a hurricane and it's pleasant but you wouldn't be swept away by it. I liked it for being a tale of a mangaka in a bygone era, by staying as a historical piece without delving into anything unrealistic, preachy or fanatical. It feels like a niche manga but for those who appreciate something slow-paced, manga creation oriented or slice of life without relying heavily on comedy, feel free to give it a go. Everyone else, this would most likely not convert you. 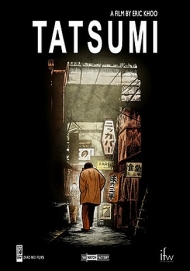