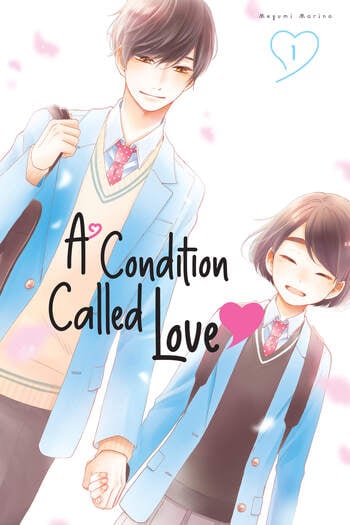 Hotaru is a 16-year-old high school first-year who has always been ambivalent about love, preferring instead to have a lively life with her family and friends. So when she sees her schoolmate, Hananoi-kun, sitting in the snow after a messy, public breakup, she thinks nothing of offering to share her umbrella. But when he asks her out in the middle of her classroom the next day, she can’t help but feel that her life is about to change in a big way…

Ya'll, I'm DISAPPOINTED in reviews, esp the one with a 4 (lmao no beef tho) Why read if you want a PERFECT character to exist? I honestly don't understand why bash a character just because the personality and way of thinking isn't what you expected? What is left for them to grow if y'all want them to be perfect at the beginning? I honestly love it when they develop into a character worthy of praise, it's like I grow and learn with them. lol, we all have different opinion, but it shows how shallow u read into a literary work. 🤷🏻‍♀️ here's my review:  ✓ romance shoujo manga 💖 ✓ Hananoi Saki 💘 Hinase Hotaru ✓ ART STYLE IS 💯, the details are 😚👌 ✓ the plot is good! my expectations in a relationship went 📈📈📈 ✓ it's surreal and realistic at the same time because the characters really reflect people u might encounter in real life 🚶🏻‍♀️🚶‍♂️ ✓ the dialogues and internal monologues are also written well, 9/10 🥰 you get to know what goes on, what they thought about, and connects you to the character 🔛 ✓ PLOT TWISTS ARE INSAAAANE, they give foreshadowing a bit, but y'all can't expect it 😵 I was SHOOKT, in an ineffable way lol ✓ the characters weren't made to be perfect. They each had their own flaws, not the little ones though, they're flaws big enough to be a hindrance in everyday life. Their development is what made me stay and hope for more! 🥺💖 Here's my analysis on the main characters: • Hananoi-kun is an eccentric, aloof guy. In the first chapters, you would think he's weird and all that - he is, but not in a way that's surreal. He's a very flawed person, not one bit of him would be liked, unless someone like Hotaru-chan cracks him through. In this manga, he is a walking red flag for many; the type of guy you would avoid dating, because he literally IS too much of a person to handle. • Hotaru-chan is weird too, but when you read mangas like this, you need to relate to the character to be able to get the gist of what person they are. Hotaru is a sheltered girl, but not in a bad way. She doesn't quite understand others emotions, because she's kind, to the point of putting others before herself. She's hardworking, and she's very caring. She's the type of person you'd get along well to, but not befriend very easily. She only has a small circle of friends, but she attracts those friends that she wants to stay for a long time, the reason she got traumatized over that one event. ✓ the relationship you'd want, but only exists one in a million 😢 unless you're at least 90% similar to the characters, I doubt it jk ✓ fluffy parts are so cute and pure, their faces were literally a relic (lmao), the type u wanna cherish forever in your kokoro 😩💖 ✓ HIGHLY RECOMMENDED 💯☑️ It really is an amazing read, if you like fluffy romance shoujo mangas, then this is one for u! 😉👍 P.S. they both become better versions of themselves bcoz of each other, that's what made it a MASTERPIECE for me. Growing as a person with and through the right partner is the one of the best character development for me 🥺💖 I love the pairing, so I hope you'll love 'em too! Happy reading! 😉😘

This is a very good and wholesome story.The male lead is kind of yandere type(only a little).And he has a reason for that too.Besides he really loves her, he just a little too much.I don't want to spoil too much.Female lead is really cute and doesn't understand about love. Their interactions are really cute.This is still ongoing so i don't know the story yet but as far as I've read, this is worth reading. Give it a try.

As much as the art is beautiful, the ML is pretty much of a constantly jealous twat even if he’s supposed to be “a gentleman” to the FL. Seriously Hotaru it’s sometimes rather best not to be with him at all, he’s just a control freak!