A Common Story of a Lady's New Life - Reviews 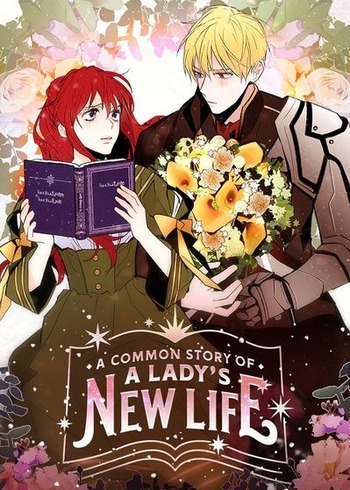 this just started so this is not my defenitive review.

As there is till no synopsis here you have it: Valery is your basic reincarnated person into the world that seems one of the novel. She says her current life is boring s the other one was. In all this she has news that a blacked haired girl was brought to a duke's mansion and she has this plan of getting to know her on a party. But a problem happens and upon watching how good the girl speaks she decides not to approach her. But the thing is he won't be able to walk away since she now was engaged to the duke itself! Will she live happy? Will she be able to get along with the girl?

my first impressions is that the plot is awesome maybe a little bit similiar to that of Adelaide (it's a good manhwa), the art is really pretty although the characters eyes seem sleepy, the character until now are great and I expect a great developmente the MC is easily relatable, a little bit smart but not to the point we wouldn't see ourselves into her.

It's taking a good direction for now hope you enjoy it!

The Many Miscommunications of Autism-Spectrum and Obviously Neuro-Nontypical Persons, more like.  I don’t mean that in a bad way, but it’s a bunch of anxious and/or oblivious people who don’t know how to socialize or communicate, dancing around each other in a bland and boring fashion with some minor comedy thrown in.  The art is very blah as well, many features are ugly and blocky, it’s not terrible but significantly below average… that and the eyes, oh my goodness.  Everyone looks like they never sleep.  Raccoon people.

I found it boring and the pace slow. The misunderstandings are tedious, specially when all evidence points in some direction and the MC just goes into lala land and decides to make her own fiction of events. And just when you think that she got herself together the next phrase shows she's still misunderstanding several things. And not only her... the Duke is a socially awkward person so he's excepted but there is no excuse for the rest.So yeah, the misunderstandings feel just forced.

As for the comedy, I don't get i, I don't find it funny thou it seems to be hilarious for other people. It's basically just each character being a weirdo, each seeing what they want and making dumb assumptions and comments. Comedy as always is very subjective, this isn't funny at all for me, utterly boring is more like it.
Storywise, I don't know where this is going and to be honest I'm loosing interest fast so I most likely will end up dropping this one before finding out.
Last, The art, its good and would be great if it weren't for the characters designs. I can't get used to it with all characters looking as if they suffer from insomnia and are in constant suffering.
Bored, dropped.

To start off I'm not a huge fan of drama*ik ik not something you would hear from a manga fan* i hate misunderstandings and stuff but this story is worth the read cause its funny af , the art is different but beautiful in its own way , and the story has your attention . The characters are too cute usually characters that are dense piss me off but this is the kind of dense that doesn't get on your nerve . You won't regeret reading this.