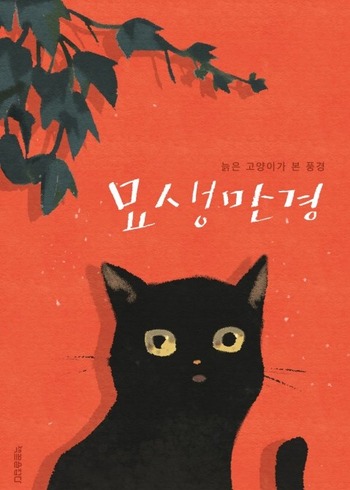 The story has an interesting premise, with the cat being the narrator. As we're progressing further along the story, we're also introduced to the key players. I won't spoil who they are here, but it's more to them than meets the eye.

In the end, we're presented a very bloody story, featuring both revenge and other interesting key elements, such as love.

As for the art, I wouldn't give it a 10 but overall it's very nice. It looks almost like it was painted with water colour, and I love that. Most of the time everything looks fine, but some minor details look off. Overall it's nothing you'd notice most likely.

The characters are very unique and interesting. We'd think the cat is the most special character in the story, but not quite. With the introduction of the countryside comes other animals. Many of these may seem harmless, but one seems to be hatching an evil plan to take revenge.

Even the cat wants revenge in a way, but he can't take it since he's so tiny in comparison. Yet, when the opportunity arises... well, you can probably figure out the rest yourself.

Overall I'd say it's a good story and you should definitely read it if you can handle gore and blood. Because there's going to be a lot of blood. And dead animals. A lot.

I don't usually enjoy angsty stories since it leaves me with this sort of guilt, but I really enjoyed this webtoon. The layout of the comic really reminded me of a children's picture book and I also really liked the art style. As for the story, the ending was very overwhelming, I had a rush of adrenaline and couldn't stop reading the rest of the story. I don't really know how to express how much I enjoyed the story, but it did feel very dark and depressing most times. I got especially interested when they introduced the white dog. Do I reccomend it? Yes I do. Do I think it's rad? Yes I do, and that's all that matters in my opinion.

More like "A Chicken's Tale," amiright? (cue canned laughter) Anyway, the story probably functions better as is--framed as being from the cat's perspective--but I did think the constant narration detracted from the action at times. The chapters also (intentionally) end in awkward spots, but the overall story is still very engaging. The first three or four chapters are all focused on a specific animal at the family's farm, introducing them and showing how they are cunning and clever. Then it gets into the meat of the story, which I won't go into too many details about, but I will say that I thought the romance was pretty cute and the climactic bloodbath was an alright resolution to the power plays that preceded it. This is a good story.

The artwork reminds me of children's books, picture books. I think the way the text is placed over the full-color images helps add to that vibe. Grainy texturing. Overall, it's nice artwork though. And the animal mannerisms are well portrayed. The biggest flaw with it is probably the way it'll repeat panels. There are several times where it'll even show the same panel back-to-back, but with a darker background in the second one. The first time this was done, I thought it was a neat little effect. But I eventually got tired of how many times panels were copied and just zoomed in or otherwise minimally altered.

This is so good. It is so well detailed and well thought out. It is completed and you can binge read through it.

Never imagined I would be so invested in a hen house power balance. But here I am, amazed and trying to figure out the main theme of this one. I think it's the loneliness of superior minds, and how this loneliness it's an unnecessary self infliction. This is true with the cat, the dog and the two chickens. They all are keeping the distance from all the others, but they follow different paths with different degrees of destructiveness, ranging between not being able to see what you really need, to just having fun spilling blood. At first I was wondering if the cat was just bored and making up stories about the other animals: the story follows the cat's POV, so you never know what crosses the minds of the others. But I was clearly wrong: they are, all four, really human-smart, and the fact you can't see their thoughts makes some of them scarily unpredictable. I knew at some point that one character would have its sweet sweet revenge, and when it happened I was all shocked, delighted and confused. The selfinflicted path of lonelyness destroys almost everyone at the end but, looking better, it's not like everyone really had a choice. Now some spoilers.

White Beak was the one not having any choice. Black Rose was choosing to be a lonely b*. She had intelligence and power, but instead of teaming up with the only intelligent chicken, she wanted to feel the only superior one and mistreated her more than the others. The dog ended up in a cage far from his owners love because of his choices. The cat too was choosing a different kind of solitude, but he was in the lucky position to understand he had what he needed most already beside him. White Beak was the only one that wasn't choosing to be alone. Yes she gave the worms to the others just to live peacefully and not because she cared, but then she fell in love. She cared about Tonky, and then loneliness was again forced on her. No wonder after his death she totally snapped. And in the moment of her revenge, she was on her own. Not even the cat could have really been her ally. He sure saw himself as such, but I believe she was too full of hate and resentment about her condition as a chicken to care about the privileged cat's simpathy towards her. What good from befriending the cat? She'll be soup anyway if she doesn't get away, he can't understand.

The cat had three questions at the end. I guess one was "how did you get out by yourself", and that got answered. I'm sure another question was "why did you put the dead rooster on the doorstep?" and I think I have a good theory. White Beak was trying to frame the cat, leaving a dead animal on the doorstep as most cats do. She wanted to involve him as one of the culprits. She has all the reasons to hate him: he's free, he has the love of the humans, he'll never be eaten, he's family. They have the same intelligence but she's food. The resentment must be really high. Yes she saves him from the dog, but he saved her earlier, she was just repaying a debt. If the dog attacked him first, he would be dead. The only reason she doesn't plan the cat's death from the start is beacuse he didn't eat Tonky, but by framing him for the deaths she planned to make him lose forever the love of the humans, lowering him at her level and doing some "justice": neither of them did anything specific to deserve the cuddles or the knife, so why he gets the first and the chickens the second? This interpretation gives a different vibe to the last scene, when she visits him and he's still the loved family cat. We know he's a good cat and deserves it, but White Beak doesn't give a damn about it. I think she judges, resents and envyes him, so much that she doesn't want to talk with him. I can't figure out what the third question would be, maybe "what will you do now?".

My only wtf: it's a hot summer day and you plan some chicken soup? Do you eat it cold or something? Isn't the point of chicken soup to warm you up in winter?