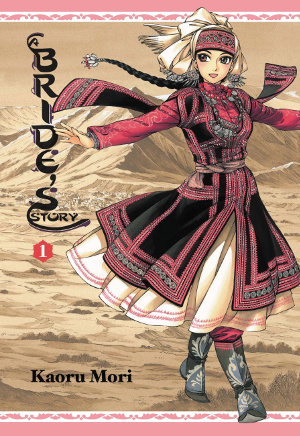 Though it may seem weird that the girl's much older than the guy, with the guy being on his early stage of adolesence still. It's not, I assure you. As you read on, you won't feel any of that at all. In fact, their relationship may even be described as something innocent.

I really like how this manga depicted a scene of arranged marriage. Because in a place where arranged marriage is like a natural thing, trust me, girls most of the times doesn't violently complain but calmly accepts the invitation, and would calmly refuses if allowed by their parents or accepts if she doesn't find anything wrong with it.

I love how the manga didn't show the usual problems people who can't relate thinks happens in these kinds of arrangements. Because in our community, people involved in an arranged marriage doesn't dwell on things that outsiders would have problems on, things like them being strangers or whatnot. Both party usually accpets silently and go with the flow of things; just like what happened in this manga.

I really love the additional wisdom talks though and the innuendos. I love the art and the designs of the carpets and sort-of comforters in the story.

Plants and animals are drawn beautifully. The ornate clothing is always drawn with precision and detail. Faces are emotive and attractive, and easily distinguishable. It's gorgeous art. And the panorama shots of city roads and landscapes take my breath away.

I love almost all the characters. And one of the nice things about having a slice of life, sorta meandering storyline is that it doesn't feel out of place to devote a chapter to the goings-ons of a side character. This allows for characters beyond just the primary ones to feel more fleshed out and developed. The characters that I've grown most attached to are Amir, Pariya, Balkirsh, Yusuf, Joruk, and Ali.

I rated the Story lower because even though most of the stories are pleasant and a decent number of them are captivating, there are also several plotlines which I don't really care for. Namely, the stories of Leily and Laila and of Anis. Also, at times, the mundanity of the daily life can feel less than fascinating. The best plotlines are the tension with the Halgal clan and Pariya's marriage prospects. I can't exactly point to certain chapters wherein these stories lie since the author weaves together several subplots and storylines throughout the narrative, creating a tapestry of customs and traditions from nineteenth century Central Asia--with a focus on family life and especially marriage practices.

This slice-of-life historical fiction drama series is probably not for everyone, but undeniably it is visually one of the best. Personally, I consider it to be the best art among hundreds of manga series, which I have seen so far. What I really like how visually heavy is the story telling. It has panels where no words are uttered for example, when characters are hunting. The inner thoughts are expressed visually quite often. It’s more like watching a movie than reading book. The drawing is very detailed from various carpentry, embroidery, ornaments and animals – horses, birds, goats, sheep, falcon. In my not so humble opinion when it comes to animals and clothes this series stands above all. It’s the number one. The human characters preserve distinct manga feel still. It’s that good.
The story is set in the 19th century Turkmenistan (central Asia) and few other countries. I can’t ascertain how much historically accurate it is, but I’ve heard the settings are pretty accurate. It seems to focus on freshly married couple with unusual age gap, because the bride is young adult woman Amira (20) and groom Karluk is boy (12) just on verge of journey to grow into an adult man. There is also a cultural gap as well, because Karluk lives in a city and Amira is from nomadic clan – skilled with bow, riding horse, different clothing style, etc. However, the story is just not about them.

The story includes wider family of Karluk and Amira. There is bit slower parallel story about young English adventurer Henry Smith [1], who is visiting the region. Various additional stories and characters are introduced thanks to him as is he traveling through the area. He is the bridge which connects everything in the series together. The story seems in the beginning to be just about single family, but it’s soon expanded with a story about two lively twin girls Laila and Leily [2], young wife of rich man Anize and few others [3]. While there are parts regarding men, the story shows more perspective of women. Just beware the true last boss of the series is the grandma [4].

Despite the series not being an action oriented it has some conflicts and action segments. There are rumours of war. It also contains some nudity i.e. women bathing.

Overall, a superb series, highly recommended. I enjoyed it way more than I initially expected. Well-deserved 10/10. It shows traditional culture and can be pretty wholesome, despite some dramatic moments. At least this is how I see the series. One more important thing. If you are going to collect physical volumes highly recommend to buy “the wide edition*”. It’s very expansive, but totally worth it imho.

The series doesn’t contain that much text, but it’s adult series mostly without furigana except for some more uncommon words and kanji. It contains lot of theme specific language (horse riding, animals, embroidery, etc.) and some technical terminology concerning producing photography, but doesn’t have old character forms as far as I can remember. I think it’s only slightly above average difficulty 6/10.

This review is written after reading 13 volumes (all existing at the time).

[1] On his way to Ankara he meets widow Talas, which falls in love with him. He promises to marry her.

[2] This story follows them as they enter into marriage with two brothers.

[3] Socially awkward girl Pariya and her journey towards marriage. Smith’s guide, an ex-soldier and Smith’s friend and even his relatives.

[4] She saves child from falling off the cliff and even kills or rather finishes father of Amira after he instigates attack on the city.

I loved it. Don't let the cover fool you because the series is still ongoing.

The art is amazing. I applaud the artist for giving such detail to the outfits and for her research.

What captured my attention in this manga was how it gave life to the characters and different kinds of cultures and the mindset of people in that century.

A lot of mangas try to show our modern beliefs in the old times which is nice however this stood out from the rest since it does not criticize the past beliefs and what other cultures believe in.

As for the romance part, I found it wholesome, especially the main couples though the age gap may throw some people off and the fact that the woman is 8 years older. If you are thrown off by it, try reading the first 10 chapters. It is worth your time. The side characters and side storylines are interesting as well.

Overall, this manga was a breathe of fresh air for me and I would definitely reread it again when there are more chapters.

Omg, I have found a treasure! This manga is so well build. The story, the characters, the art, everything! I love it so much! The other reviews will tell you in detail why this manga is one of the best, so I will leave it to them. But all I will say is that I 100% recommend this! This should be more popular!