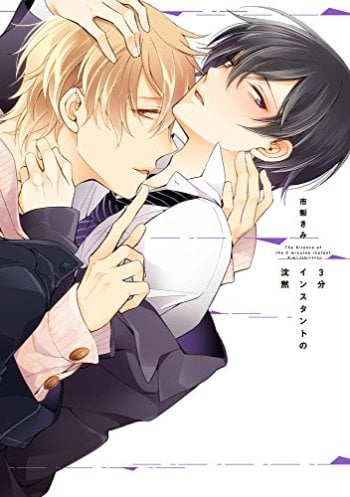 The Night Before the Wedding

In a twisted tale of the seduction of taboo, two brothers find that some bonds go deeper than blood. The night before Rikuto’s wedding, his handsome, successful younger brother Takumi pays him a visit. What should have been a standard congrats quickly transforms into a night of sordid sex when Takumi ties Rikuto up and claims he’ll stop at nothing to prevent the next day’s nuptials! Will their union bring them happiness or leave them clawing in the darkness of despair?

The super-popular Miki and the nerdy Takao are twin brothers. They have a mysterious bond through which they share all senses, from pain to pleasure. One day, Takao feels Miki being sexually simulated! As the repressed older brother is penetrated by his playboy younger brother, the two grind against each other to feel the ecstasy of being one.

Open the Door to Your Heart

Shoichi, the oldest Honda brother, is a stiff and serious young man who works as a tax collector. His life isn’t exactly full of surprises…and he definitely never expected his long-gone younger sibling -- the globetrotting, sexy Shunji -- to show up at his doorstep! Will Shoichi ever erase the memory of the secret, scandalous night that he and Shunji spent in one another’s arms 10 years ago? Or maybe the most important question is…does he even want to?

The Kimishima brothers each have a secret: Takumi who wants to embrace his older brother, and Hikaru who's surrounded by women. But what Hikaru truly wants is to be embraced and messed up by someone. But when the suppressing desire unfolds, Takumi who thinks that there's an indirect connection between him and his older brother by means of embracing Hikaru's woman. This brothers' bond has gone amiss.

As the eldest son for the Kadokura family, Kouhei's biggest worries are his younger twin brothers, Aoya and Shion. Despite always being foiled in love by his younger brothers, the virgin Kouhei has finally landed himself a matchmaking session. But, saying "our true desire is you, big brother," the twins pounce and teach Kouhei how to feel good!

Twin brothers are reunited for the first time in seven years.

Brothers Masaki and Kai are reunited after 7 years apart when their father passes away. With their reunion brings the question 'Who will be the one to succeed the family?

When illegimate offspring Yoshiaki encounters his half-brother, the family heir, sitting at the curbside, drenched in the rain, he takes him in and sleeps with him... but what hidden motivations do both parties have?

When they were children, being brothers was enough reason for Taisei and Kouta to live together. However, since they've grown up, Taisei has become aware that his feelings for his little brother Kouta go beyond brotherly love. He can't take these feeling anymore and leaves home. Several years later, when he returns home suddenly, Taisei asks Kouta earnestly, "Teach me the family business!" And so the next chapter of life together begins. The little brother tries to pretend he doesn't know how his older brother feels, while the older brother wants to make his younger brother acknowledge his feelings.