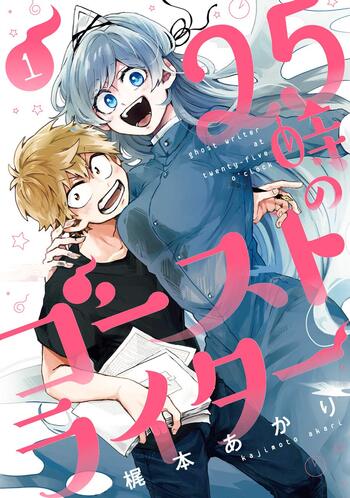 TLDR: An fairly enjoyable and well done story with a confusing albeit "rushed-feeling" end.[Recommend]

Story[Spoilers Ahead]:
The story is about Higurashi Tsugumi, a prodigy novelist who fell into a slump after his first work won a grand award. Due to this slump he decided to return to his childhood home hoping to find some kind of insipiration only to find the spirit of his childhood maid "Nico" instead.

The story I think was quite well done considering how much the author was able to convey in about 25 chapters. If there was any complaint I had with the story is that it relied heavily on flashbacks and I wished there were more subtlety in the storytelling instead of characters just directly conveying their emotions and perspective to they audience.

Art:
Very good especially on the character and emotion side of things. Environments and location arts are good with a "fluffy" feeling constantly present in almost every setting (the office being the only exception). Character art is fairly unique though it reminded me a bit of some  smutty romance manga for some reason, but despite that facial expressions and character art is the strongest aspect of this manga is carrying the dramatic moments in the story, very good stuff.

Characters:
The weakest aspect of the manga to honest but it's due to the number of characters present. The MC's Nico and Tsugumi are very much the focus of in this aspect but I did feel like Nico got the better treatment as far as character progression goes while Tsugumi is more like the "passenger" of the story for the audience to ride on, though he does have great moments here and there. Some of the side characters also just feels like add-on just to progress the story like Sakura, Hiyoko and Kouta being more like stick for the MC to talk about his feelings for and obtain feedback from.

Overall:
Fairly enjoyable and very consumable drama manga that you can finish fairly quickly in a single evening, I think it has a lot more hit more for others than it did it for me but I liked it nonetheless. I would recommend it even with it's fairly confusing and rushed ending.