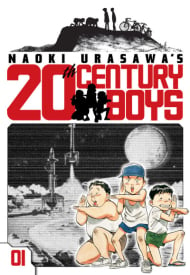 The world is never quite the same once we grow up. Villains and robots that once ran rampant in our imaginations are reduced to drawings in Manga, and our lives are distilled until there is little left but the daily grind; so it has been for Kenji. After a childhood of dreams he now runs his late father's liquor store and is raising his sister's child. The memories and friends from his early years bring him some happiness, but they become tainted as a string of murders find connections to his past. Kenji and his friends must now fight to save the future from their past and unravel the mystery of "Friend."

There are some mangas that have completely no appeal in it's outer appearance. You look at the cover and think "Ugh how ugly". You read the description and think "Sounds boring". There isn't a single thing that may convince you to try this title out. And then some small event changes your mind - maybe a friend recommend it to you. Or you notice the author is the same guy who wrote another title you love. Or you read some spoiler and think it might turn out to be interesting.  You start reading  - first few chapters aren't that hot, and it looks like your predictions were correct. But why drop something after few chapters? You read a bit more, and the story starts to get interesting.  So you continue. And then, few hours later, after night without sleep and a lot of volumes finished, you take a little break and the thought that occurs is - "WHy the hell haven't I read this earlier? This is unbelievably awesome and made of epic win". That's pretty much how 20th century boys are.The story starts weak - some disappearance, weird cult and "normal guys" type of characters. But with each passing chapter the spiral of events started by a childrens game is getting bigger and bigger, and eventually the effects of the plot becomes global. Characters that notices what's going on try to stop the horrible plans from succeeding, only to find that the organisation they are up against have taken it's roots in almost every sector of their country. And all of that, while trying to figure out who really is "Friend", and what exactly happened in the past.Characters are human to the core. They are weak and easily deceived. Even if they try their best to prevent it, often the plot orchestrated by enigmatic sect still succeeds. But they don't stop trying to play heroes. They grow a lot on the course of the story and evolve along with the world.The art is ugly though, just like in Monster. Only the few main characters have somehow acceptable looks. But I guess this adds to the realism - a story full of big-breasted girls and thin bishounens wouldn't have that much impactGo read it now! It's really worth the time.

Story: Naoki Urasawa's name on the cover is a seal of quality. You know the series you're about to read is some of the best in the genre, if not the entire damn medium. He's just that good, and 20th Century Boys is no different. A tale of heroism and heroics, childhood dreams and growing up, good vs evil and confrontation, it spans a nice set of volumes and with detail, loads of dialogue and for here, the power of music, driven by T.Rex's 20th Century Boys. While the tale is a long one, it has the Urasawa style of taking it's time. It doesn't rush and for better or worse, it gives you all of what you need to know in it's own time. It does a nice job of creating plot threads, sub-plots, wrapping up plots to create new ones and branching off into other threads, delving deeper into the mystery of Friend and all it holds. It's no easy read, meaning you should be keeping up with it (Even with a plot recap per volume and a character sheet) and at times hard to put down. Felt myself reading more than I wanted for the day just to see what would come next. I don't normally go into plot for grand epics like this and for this one, it wouldn't be proper. Something like this should not be spoiled. Should not be hinted at. If I somehow blurb out a plot point three volumes in I would be sentenced to hang until dead. But it spans time periods; switching from the childhood past to adulthood, Urasawa does it masterfully, weaving threads through one era into the next and back again, making connections through different view points and it all clicks together. I guess the only fault I can find is in the final few volumes of the series. Didn't entirely like the route it took but I can't deny that I enjoyed it. Hard to wrap up everything nicely but there's the additional 3 volumes of 21st Century Boys, something I held off on until I wrote this little review. Can't have it muddling my thoughts now, can I? And the plot, twisty and filled with turns, to go along with how gripping it is. Not conventional and breaks a few rules but that's what I love about it. It's pretty unpredictable and an engrossing read. Art: Yup. That's Urasawa alright. The art style hasn't changed a bit and I love it. It's comforting how it's so consistent and have no qualms on it. Characters: Oh god. Loads of them. There is no way in hell am I talking about a few specifically. I'll just... skip the details and give you some brief praise on it. Characters. Like God creating life, so does Urasawa breathe life into the characters on the page. You feel a whole slew of emotions for them and simply wish them the best. Symphasize for others, weep for the fallen and admire the brilliance of others. At the helm of the last one is Friend, the face of the series. The most brillant of villains since Johan in his orgasm-inducing amazing series Monster, he is just beyond words. That, is a villain, a worthy villain to combat the righteous heroes of the Kenji group. The characters will stay with you after the final pages turn and they're memorable, from the past to the present, the trials they face together and obstacles they strive to overcome, they're just amazing. They aren't one-dimensional, they're human on an inked page and half the reason one would continue reading. Overall: Once again, I could just say "It's made by Naoki Urasawa" and call it a day, but noooo, I had to write and write, because some people are dense enough to need "reason" when the author is all the reason they need. But if you read this far, know that this is as good as it gets. It's near perfection and if you want a good- nay, excellent story, read some Urasawa today!

Story: This was an amazing manga. I will admit it took me a while to get into. The first time I tried to read it I dropped it after a few chapters and it took me almost a year before I decided to read it again. On this second attempt I decided to stick it out and I am very glad I did. They story is a bit hard to follow because it is told from different characters perspectives and it is told through various time periods. There are a bunch of characters so it can be a bit confusing at first but around chapter 25 or so I distinctly remember going "OH SHIT" for the first time becuase at that point everything comes together. We as the reader are given various bits of information and its mindblowing to see it all come together. By chapter 50 i was completely hooked. The story was great and was filled with many twists that kept me on the edge of my seat all the way through. Characters: The story follows a group of childhood friends throughout their lives, and is told from various time periods in their lives. The main protagonist the story follows is Kenji but it is also told from the perspective of other characters in Kenji's friend group. Kenji and his friends will to just survive against all the odds is amazingly moving and help make. what is in my opinion. one of the best villains I have come across in any manga, "Friend." As kenji and his friends begin uncovering Friend's plan we truly see how twisted Friend is. Friend is extremely evil but at certain points you cant help but feel for him and by the end I dont agree with his actions but I can understand why he acted the way he did, and I love that about this manga. There are also amazing side characters. They are really who build this manga becuase alot of the story is told from their perspectives. Characters like Yoshitsune, Otcho, Kanna, Yuikiji and God really steal the show and stood out to me. Overall: This manga is a true work of art. Its beautiful and mindblowing experience to see the story unfold as different bits and pieces all begin to come together. This story is really about humanity, how everyone no matter who they are or where they come from just wants to survive. I loved this manga, and really regret that it took me so long before I read it. For anyone thinking about reading this, I would highly recommend it and my only advice would be to stick it through the first 25 chapters or so and really take in all the characters and plot to the fullest. 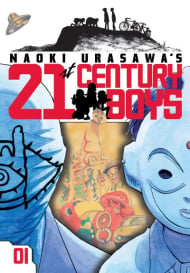 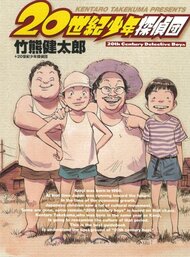 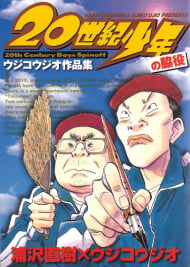