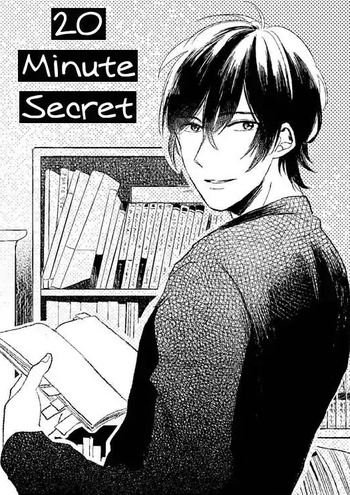 The Collar Boy and the Favourite

A tutor and a student, what happens after confession?

Michiharu is the only failing student in a highly educated family. His father tells his failing son to go visit a relative’s house to get lessons. When Michiharu visits his relative’s house during summer break, his cousin Natsuki, who is rumored throughout the city for being “extremely gay” is standing there, waiting for him! Natsuki insists that not only will he teach him how to study, he will also teach him how to play in the night…!?

Video store clerk Amamiya Shouta has a unrequited crush on salaryman Shiraishi, but has sex with fellow college student Kuraki. Shouta thinks of them as just sex friends, but Kuraki has a dark and possessive side that Shouta unwittingly brings to the surface...

After being dumped by his girlfriend, Iijima (a tutor) is confessed to by his shy student Daisuke. The incident takes Iijima by surprise... and it also makes him realize that he's gay. But the 5-year age difference and his position as Daisuke's tutor makes Iijima reluctant to accept Daisuke's confession. However, Daisuke doesn't care about their differences and, despite his shyness, is determined to win Iijima over.

Eros in the Stoic

A very short oneshot focusing on the idea of "eros" (passion, longing, love), and the narrator's own preferred definition.

Hey Miss... Turn Me into an Adult: Being Threatened by My Indecent Student

Ayako, an ordinary lady who works at an office, finds herself in an unrequited love with Yuto, her senior in the company. He's done nothing but take care of her and look after her. So, hoping to return the favor, she announces she would be Yamato's, Yuto's little brother, homeschool teacher. She's excited to go to Yuto's house, but finds the pretty-faced Yamato saying some terrible things to her. "You're terrible at kissing... Or is that just an act to instigate me...?" She knows that she shouldn't be doing this, but she feels as if she's sinking into those deep blue eyes of his...

Katsumi's unrequited love for his friend has left him frozen in time, will ditzy model Reiji be able to reawaken his heart?

The Masked Tutor And Innocent Shut-In