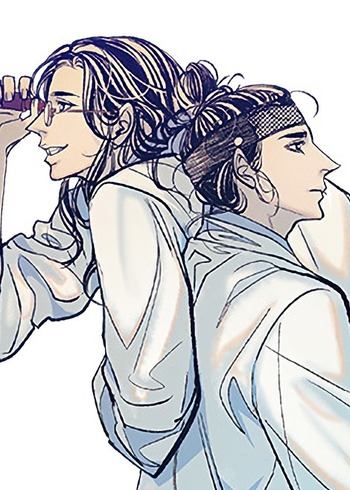 It was short lived but it was good and understanding

I liked the time period it's in

so basically it was about the "seme" who waited 2 years for his "uke" to come back from his "studying" ......when he came back the uke was catholic which isn't something Asians "should" be around this time because it's a western religion and Asia already has Buddhism, so they feel that priests are forcing them to "change" religion or something......so around this time if anyone is found out to be a catholic they would be hanged/killed.

so when his lover came back he wanted to leave for China the Qing dynasty which wasn't so bad at "accepting" foreigners and foreign religion, but he was captured the night he was suppose to leave for being "catholic" and the he told the seme to go to China before him because it's gonna be alright, but in the end he never came and the seme got old waiting for him.

the ending was pretty sad, I would have cried it was a little more than 4 chapters

they were practically childhood friends to lovers

It's definitely a well put-together tragedy. And the fact that the most explicit of sex scenes occurred in the first chapter instead of the last was a difference compared to a lot of the BL that I've read. It's set in 19th century Joseon (Korea), with the final chapter taking place in Qing (China). It deals with the oppression of the state against people who were different--Catholics and gay people, in this instance. Gyeomyi always worries and Jungyi always tries to reassure fem.

The artwork looks like images pasted on top of each other; the depth isn't necessarily all there. The majority of the images are crisp and well-drawn though. It mixes coloring with black-and-white. A lot of pinks during the sex scene. The way the hair is drawn made me think of old-timey Japanese paintings, and in general it mixes together a variety of styles. On some level, I can appreciate the experimentation and willingness to switch things up, but it can also be a bit annoying to have the art styles lack consistency--sometimes even within the same panels. Some of the images of the sky are clearly photographs, and the moon is just a blurry paste-on.

This book has a good storyline and the end is mostly expected as it was the case for most people in reality a few centuries back though it hurt like hell I like sad ending.. Sometimes. It just shows us that it's life. Not everyone could get a happily ever after. So don't read it if you are a big fan of HEA. Though they certainly deserved better.

Characters are only two as it was so short but they leave a deep impression though there love was short lived. They are opposite of each other and still fit together beautifully.

I liked that the uke gave the seme a purpose in life. He learned so much because of the uke.

PS: I knew this was gonna end badly when I had seen that cross.

It was only four chapters, then the next thing I knew, I was slicing onions. I was expecting passionate love making and it didn't disappoint me, but I also got a bucket full of tears. It was heartbreaking to see Gyeom keep writing letters even though he didn't get any responses, but he still didn't give up and waited for years for Jung to come, but the sad part is that he didn't know his lover was decapitated.

You can tell the story was very well planned out and the art was also beautifully done. Definitely hit me harder than expected.