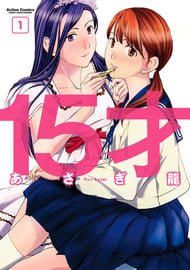 Third year middle school student Anna has begun living with fourth year college student Ema, and is swung about by the tactless Ema. Drawn in by the romantic designs of Ema, the once perfectly ordinary Anna is brought into the adult world. And then she is shown the scene of a kiss between two girls...

491 users are tracking this. Log in to see stats.

Fifteen years old … more like 18+ for this erotic yuri drama series. The story follows middle school girl Anna (14/15) and college student Ema (21/22), second cousins (i.e. their respective parents are cousins). So, they are technically not really related much, like if that matter to begin with. Two women can’t conceive child together so it’s pointless concern. The age of Anna could pose bigger issue, even if Japan’s age of consent is pretty low, but I digress. Because Anna’s parents are away, she gets to live with Ema. Ema is beautiful adult woman, but has issues with love interest of her Yoshino [1]. She starts to feel lonely and that nobody loves her for that reason. She has bit irresponsible side to her. At first, she is friendly and teaches Anna how to use makeup. After being rejected by Yoshino, Anna tries to cheer her up. Ema becomes clingy and teases Anna, because she is drawn to her. Anna starts to question what does it mean to fall in love. She isn’t entirely indifferent towards Ema either. The build up isn’t bad, but it feels bit fast at some points. It should be slightly slower. [2] What kicks of Anna’s hormones is scene, which doesn’t relate to her directly. [3] The story escalates into love triangle or rather love square, because the drama revolves around those four characters. Side characters are for greater part just pair of Anna’s friends from school. Except one of them, there is nothing pretty much to them. It’s a bit shame the side story concerning one of the girls starting to date friend of her older brother isn’t explored much. It’s almost pointless. I like how the series makes Anna’s mother as controlling and distant, which could explain some of her behaviours. Overall, the drama is I would say good. The last third was bit weaker than the first imho. [4] Visuals and art style are pretty darn good. Especially if the point is to pull off this kind of explicit manga. Yes, it does contain explicit scenes from plain underwear, nudity, kissing, touching and more. If this ever would become anime, I have feeling, it would be basically Redo of healer considering sexual scenes, but as yuri/GL drama. Except the explicit parts are bit spread out and there is zero violence. The point is it does reside in that area of adult content. If you are looking for yuri going beyond mere kissing, which still does have some story in it, I think this is it. The series is pretty short only 3 volumes. Japanese language difficulty 5/10 (see my profile for details about various difficulty scores) It’s adult series. Furigana rarely, usually just on names, when introduced. Spoilers [1] Yoshino is her superior (female) in cosmetics shop/company she is working. [2] Especially going from half-jokingly teasing Anna by checking what kind of panties is she wearing to straight up diving into her crotch for some tease. That escalated rather quickly. [3] She sees one of her schoolmates, Miku, girl she has been slowly befriending, kissing a man. Later on, for some reason Ema kisses Miku, for whatever reason – show her there is more to life than one man, to tease Anna, to make Yoshino jealous? This part is somewhat confusing, because I thought initially it’s just previous events projected into Anna's fantasies, when they are visiting the cosmetics shop. It’s super far-fetched considering Japan culture. [4] But I’m glad the ending is happy ending i.e. everybody is pretty much in more happy place, than in the beginning.