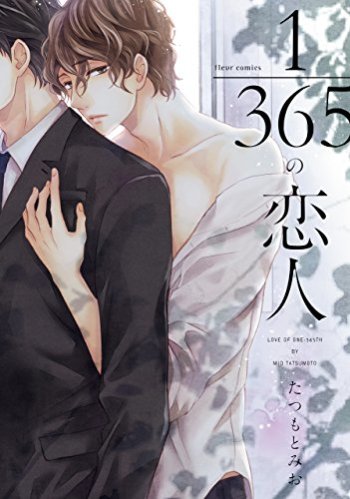 One day, at the party Takayuki attends, he meets Takeuchi - his old classmate from high school 8 years ago. Takeuchi’s girlfriend in highschool was stolen by Takayuki. What will happen when the two meet? What will happen when one of them is drunk? Will Takayuki painful feelings of unrequited love come to an end or will there be a happy ending?

A Friendship Gone Too Far

"I never knew doing it with a guy could feel so good..." When two of his close friends come out as a couple, Yoshi starts wondering what it's like to make love to another guy. When he starts searching online for a partner to experiment with, his friend Kan gets worried, and offers himself up instead! Also included in this volume is "Be Mine," a mature romance about Ryu and Haru, the best friends of Yoshi and Kan.

In this world, there are some people who you are not allowed to fall in love with—— Yuki lives together with his deceased older sister’s husband—Keiichirou. He fell in love at first sight, and continued to hold those feelings secretly since then. But that means nothing, for this love is not to be allowed. One night, Keiichirou hugged Yuki and said "Stay with me"! Since his sister’s death, the dangerous balance between them finally starts to crumble!?

All Roses Have Thorns

Hikaru and Ryu were classmates in art college and have been friends for twelve years now... But, ever since winter ten years ago, Ryu's confessed his love for Hikaru multiple times. Each time, Hikaru's managed to dodge giving him an answer, and they've continued to be good friends, but when Ryu, who's an artist now, is dodged for the tenth time, he pushes Hikaru away by saying not to come back if they're just friends! One is an elite artist who lives in his own world, and the other's a ditzy guy from a rich family in Kyoto.

Reiji has never forgotten Kagami, the man who cruelly dumped him 10 years ago. Now, they unexpectedly meet again! Will Reiji finally be able to let go of his unrequited love, or will his love for Kagami once again only lead him to heartbreak?

Suzuhara lives in a cheap apartment which has way to thin walls; whenever his neighbour Nishino brings home girls for the night, Suzuhara can hear all of it! At first it only annoys Suzuhara but when his long time crush, Nakayama, asks to borrow Suzuhara's apartment so he can have sex with his new girlfriend, everything changes.

The Dream of the Cuckoos

For four years, Shougo Natsuka has loved his popular, perfect, and handsome classmate Hiro Hakushima. Out of fear of ruining Hiro's reputation, Shougo never confessed his feelings and remained his friend over the years. Now in college, Shougo has started sleeping with Seno, a sex friend that is the exact opposite of Hiro. Shougo settles into a life with staying by Hiro's side as his friend and releasing his urges on Seno. But, when Seno and Hiro experience a body-switch after an accident, will Shougo finally be able to touch Hiro through Seno's body?

Okubyoumono ni I Love You

Due to his scary face, Shougo has been alone since entering university. But unexpected events lead him to become close with Hina, from the same university. Shougo, elated at the fact he's become friends with the cool and kind Hina, finds out that Hina breaks out into hives when people treat him with affection - a "love allergy"?!

Jun secretly loved Hayato since highschool. But Hayato already has someone by his side, his best friend. A few years past, Jun sees Hayato again in his job. He took him home after a drinking party. His dream turned to reality. Everything seems to go well until... Hayato tells Jun not to come over because a friend will stop by... without explaining much... Jun becomes nervous about the outcome of their relationship. Is Jun the real lover? Or is he a substitute for someone else?

Kanda Tokizou, 42 years old. He has an unrequited love for his best friend from high school, Shiba Ryuuji, for 25 years. He has always depended on Shiba, but there is no possibility of him telling his straight friend about his feelings. “To live my life with my best friend at my side isn’t so bad.” But now, at the age of 42, there is an unexpected chance. Could their relationship possibly change..?