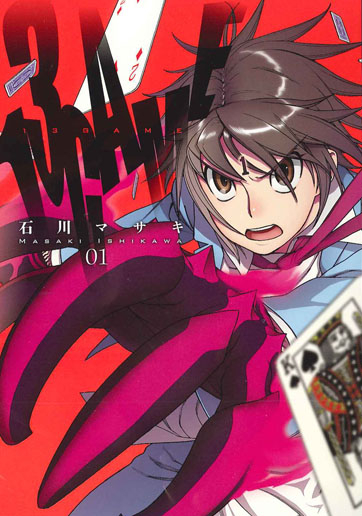 Kei, a cynical and arrogant high school student, has minimal regard for others; so it's much to his surprise that when he's asked by his elementary school friend Kato to save a drunken bum laying on the subway tracks, he actually complies. However, no good deed goes unpunished, and they are swiftly decapitated by the oncoming train. Kei and Kato awaken in a nondescript room occupied by a black sphere and a variety of other people, and thus begins Gantz's game. In it, the players must face off against aliens in battles where death is inevitable and rewards are minimal. Unfortunately for them, this is just the beginning of their nightmare - at least, for those who manage to survive...

While not 100% similar, both involve players who have died and must battle it out (either with each other, or against external monsters/foes) for a rare and special prize. Dying in the game leads to a permanent death. I do think Gantz is the more superior of the two, but both will likely appeal to the same audiences.

Two high stakes games manga that pit players with a mysterious body mark against each other one on one. Both equally as uninteresting but might appeal to the audience due to the themes.

Alice Ryouhei, now a grown adult and married to Yuzuha, who is expected to give birth to their first child any day now, suddenly finds himself back in the Borderlands, the land between Life and Death, after getting into an accident. Will he be able to make it out of the Borderlands once more...?