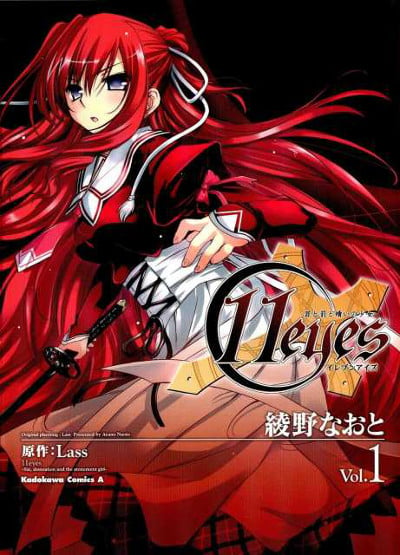 Warning this review may contain spoilers:

So this is my review for the 11eyes manga hopefully this will be better than my poorly written one for the anime. Well to start off the story follows a boy Kakeru mainly and how he gets dragged into a fantasy world with a close friend, Yuka (who is slightly annoying and I really don't like her much). Then he gets involved with all this fighting demons and stuff, blah blah blah. Pretty much follows the same story as the anime, makes sense as they were both based off the same Eroge and made around the same time.

The overall story seemed to be pretty well laid out, there was tension and drama between chapters and the start of the story was well written. They also did a good job at drawing an audience in from the looks of it. Another thing is that how the situation was explained, like why they were being dragged into this other world, was well sorted out in the early chapters. BY chapter 6 we had the main 6 characters in the story from here you would expect it to get better. At the halfway point the story seems strong but rushed slightly, I guess this is because they are aiming it to be a short manga. Chapter 6 though seemed like they were only trying to build the realtionship between certain characters. Chapter 7 seemed strange...but I guess that is just me. Finally the final chapters, it all seemed way to forced and rushed, personally this manga needed a few more chapters. Something just seemed off. However this ending was much better than the ecchi pointlessness of the anime.

The art was well drawn I personally thought it was well presented overall. However I wish that there was slightly more detail in the character's eyes due to the fact that when they weren't coloured I thought that the detail that could of been there wasn't there.

The characters were alright, like in the anime I liked some characters and hated others. Kakeru was your typical character that is weak at the start but then grows to become one of the strongest. Yuka, the annoying childhood friend that annoyed me so much in both anime and manga. Other characters I wish there was more development for them. This short manga had pretty much no character development and let down the manga quite a bit.

Overall this manga was average, the character development was weak but the storyline ideas were there. They just needed a bit more