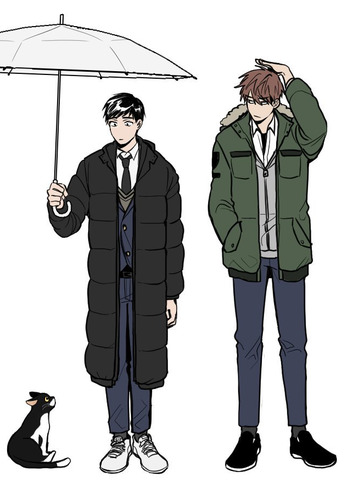 Mujin is a half-demon who transforms in and out of his demon form, Lewellyn. But when he reunited with his old friend Eunil, Mujin finds out that their relationship may be headed in a different direction...

Heesu’s world revolves around Chanyoung, his best friend and secret crush. He doesn’t mind cheering Chanyoung from the sidelines or listening to all his girl problems. He doesn’t care if people only know him as “Chanyoung’s friend.” Then one day, Heesu starts hearing his name everywhere. On the bus, in the halls, during lunch… Turns out, there’s a rumor going around school (Got a love problem? Find Heesu in Class 2 and he’ll tell you what to do!) and with that, Heesu suddenly finds himself the center of attention. But how could he give anyone advice? He doesn’t even know what to do about his own crush!

Quite the Ordinary Halloween

Halloween. It might be a special day for some, but at the same time, it might be a meaningless day for others. Jinyoung, who lost his boyfriend, Eunchan, 3 years ago, spends his Halloween in the least special way possible. No wait, he was trying to spend it that way. So why did the dead Eunchan suddenly appear next to him after all this time?

Yuseong, who is now a manager, used to be an idol trainee 10 years ago. Becoming the manager of Seo Tae-won, who he has a crush on. He managed to compromise on reality, and he was living without dreaming his dream. In response to the boss's threat to overturn the hit-and-run accident committed by Seo Tae-won, he takes the blame and step to the police station. "I wish I could go back to 10 years ago. I won't give up, and I'll make my debut at any cost." When I closed my eyes and opened my eyes...

During their first meeting, the five-year-old Tang Junhe started to view the six-year-old Yang Xuan as his hero, and he willingly became Yang Xuan’s little follower. Yang Xuan once said, “There are 12 ways to fold a paper plane. You didn’t know that, did you? Let me teach you.” Ten years later, the 17-year-old Tang Junhe lived in Yang Xuan’s house as his younger brother. The grievances of their past remained unresolved as the two young men fought constantly. “The first one to fall is the loser. I knew that, yet I willingly fell into it.” Another ten years have passed, and this time, the 28-year-old Tang Junhe and 29-year-old Yang Xuan met each other once more. Is it going to be a tragic story of losing the one you love, or is it going to be a story of keeping your loved one forever? The two of them cannot be the light of each other’s lives since they are both trapped in the darkness. If that’s the case, they shall walk together to find that light.