101 Ways to Win Her Heart - Recommendations 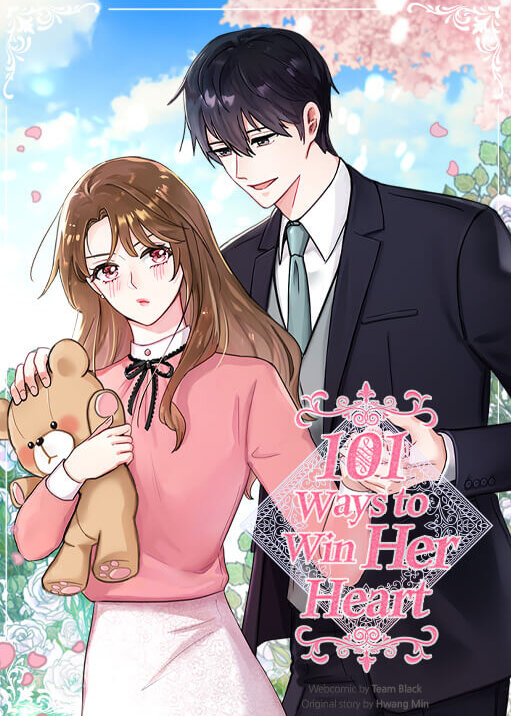 If you're looking for manga similar to 101 Ways to Win Her Heart, you might like these titles.

It was not easy to be the son and successor of a major hotel company. After spending his life for 16 years abroad, Yoo Seungha came back to Korea to succeed as an executive of his family's hotel business. Seungha was an workaholic who was ignorant of love life, until he met Han Seyeon. Turns out, she is the concierge manager in the hotel owned by his family. The misunderstanding on their first meeting leads them to understanding each other. However, they live with a very different family background, which eventually became the wall they have to overcome to make their relationship works. Can they overcome it?

Shin Chaekyung must accept the punishment of confessing to a senior on the new employee training night. The problem was, the manager she had to confess to was notoriously cold and not interested in women. After successfully confessing, Shin Chaekyung was held back by her manager, Jung Yunu. The manager made an interesting offer, which was for Chaekyung to be his shield at the office. Chaekyung, who is only a new employee, can't just refuse. How will Chaekyung's life be at the office?

I Want to Be Your Girl

"Why don't you see me as a woman?" Ha-yoon, who smiles brightly at Shin Hwi but tastes the humiliation. But there's no giving up in her dictionary! Sung Ha-yoon, a crazy foal who is fighting to become a woman of Moon Shin-hwi. Can't you just stop moving on...?

Ruby never expected to get transported into the world of a novel… least of all a spicy boys’ love novel! When such a thing happens, what’s a girl to do? Make the most of it by becoming a successful businesswoman running a luxury inn, of course! The money and power is one thing, but the chance to see and interact with her favorite hunky guys from the story is an added bonus. There’s only one problem, and that’s the mysterious, scheming villain. What was once just some brooding eye-candy is now a very real threat to Ruby’s life. Will Ruby be able to out-maneuver this scheming visitor, or is this story doomed to end in tragedy?

My Oppa is an Idol

2nd year of High School, Yoona. Her mother had left the world early and left her and her father by themselves. She relieves her stress caused by her troublesome father and schoolwork through watching Idols. But one day, her father announces that he will be getting remarried! And her new stepmother has a son? Yoona suddenly gets a new brother...

Working for a counseling helpline is never boring, but when Yoochae takes one last call for the night, she learns of a company's sinister secret from the charming yet rash Sunho. Suddenly, that company's best problem-solver, the handsome Yool Sun, pays her a visit and offers her a fake job as a mental health counselor to secure her discretion. Determined to earn her keep at this cold conglomerate, the feisty but caring Yoochae opens her heart to her fellow employees and finds herself juggling the interests of both Yool and Sunho.

As the bastard child of the Anzak king, Alexia knew she was destined for very little. The Book of Wolves foretold her destiny as a side character, from her impoverished childhood to her brutal death at the hands of the enemy prince, Tervion. But when Alexia is sent to assassinate him, the story changes. Now she’s engaged to him as part of the peace treaty between their two countries. In the face of mortal danger and abandoned by a loveless father in enemy lands, Alexia must decide where her loyalties lie and whose life matters most.

After her grandmother, the only family member she has, passed away, Jisoo started living in Hajin's house as a guest. Even though she lost her whole family at such an early age, she didn't show any signs of hardship. That's why Hajin's gaze is always on her...! The story of Jisoo and Hajin's blooming first love under the same roof.

"I want to bring it back… Our original form, our original Michael..." Evangeline and Michael grew up together on the island since childhood. However, her friend Michael left the island to become a knight and lost contact with him. When was it wrong? Five years later, Michael met again and became a cursed magician who burns the continent. "Me… I can't remember anything, Eve." “What do you mean?” "I… I've been cursed by a demon dragon." The evil dragon's curse turned the boy with the angel's name into a slaughter-crazed demon. The boy's most precious person, Evangeline, makes a decision. “I will choose you this time. Mika.” The story of Michael, who became a magician under the curse of a demon dragon, and Evangeline, who tries to save Michael.