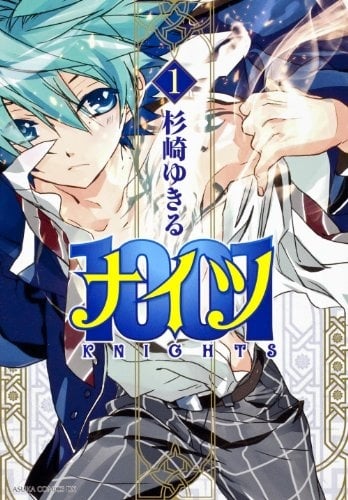 A tale of mystery and magic. Naito and Yuta Fuuga are twin brothers with very different personalities. While Naito is elegant and good in school, Yuta is athletic and often winds up in fights. Despite this, they maintain a close relationship. When their father turns up missing, both must travel to Dubai in search of him. A mysterious peddler has other plans though, as the twins soon find themselves in the world of One Thousand and One Nights.

This manga was very hard to follow. This may have been the fault of the group scanlating, but something tells me that isn't fully the case here. That actually makes me kinda sad because, beyond that, I couldn't find anything really all that wrong. The art is well done, the story seems to be full of fantasy, action, adventure, romance, and a dash of sillyness. It has all the things I want from my manga but I can't understand whats happening well enough to continue reading. For example, the two main characters have these tatoos. It isn't clear how they got them, what they do, why they are important, nothing. The problem isn't that I don't know these things, its that these things were explained and I STILL don't know. So, all in all, give it a shot if you think you'll like it, just relize it may not be very easy to read.

Hmm.. Okay, this review is, and will ever remain, incomplete simply because I don't really have any desire to carry on reading this.  I agree with the previous reviewer that the story is confusing -- at least to people, such as myself, who have not read the manga in its entirety. Maybe it all makes perfect sense in the end, but who knows? I certainly don't.  I made it partways through chapter 3 of volume 1 when the mangaka began including "explanations" of the story's mysterious plot with lines like:  "To form a seal is to have built a tower.  To isolate this world and that world.  For the sake of the birth of a door." Huh? I'm legit just reading this because I'm working my way through this site's shounen ai list of manga alphabetically as part of some ill-thought-out cultural immersion between myself and the printed word. Oh, and also because of the twincest. There will be twincest, right? The story and artwork hint at it, in that beautifully romantic relax-guy-it-might-not-ever-happen way shounen ai is famous for.  The plot has something to do with alternate realities, mystical tattoos, a disappearance of a father, international travel, a secret society of "agents" -- oh, and a Nancy Drew-style detective agency for finding lost pets and such.  There are a few things that bugged me about this story which I don't mind sharing with you: Firstly, with regards to characters, ugh, the "Western" pocketwatch-carrying, Burberry-suit wearing,  not-removing-his-shoes-in-a-Japanese-home-although-he's-been-coming-to-Japan-since-he-was-a-child stereotype of Arthur. Geez. I'm getting sick of these depictions of us. Has the mangaka ever seen an image of a Western male later than the 1920s? And, believe me, I know it's not just her, but it really irks me. I guess he's just a loveable archetype at this point and not meant to offend or irritate.  Secondly, one of the manga's protagonists gets mistaken for a girl and made to put on an abaya before entering a mosque in Dubai. Bleh. I guess it's to emphasize how pretty or "cute and compact" - thanks Arthur! - one of the two protagonists is.  However, kudos to the mangaka for trying to make a legitimate - albeit mysterious - plot which, you know, maybe somone else will be willing to untangle. Not me, though. The art, story, characters, -- none of it sucked me in enough to continue reading.